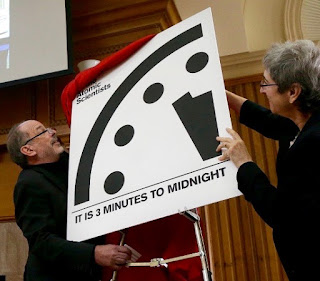 Joe Mathews writes the "Connecting California" column for Zócalo Public Square. In one of his most recent columns, Mathews suggests that California is being governed by an apocalyptic French philosopher, citing to Governor Brown's "friendship with Jean-Pierre Dupuy, who practices what is called 'enlightened doomsaying' from academic perches at Stanford and Paris’ École Polytechnique."

Naturally, hearing about "enlightened doomsaying," which sounds to me like it has the ring of truth, I rushed out to acquire Dupuy's book, The Mark of the Sacred. Here is a pertinent quote, from Page 58:


Martin Rees ... one of the keepers of the Doomsday Clock ... gives humanity only a 50 percent chance of surviving until the end of the present century ... Rees is certainly not alone in speaking of the possible extinction of the human race."

I have not yet finished this book. I am recommending it, even so. Dupuy claims that his "doomsaying" is, indeed, "enlightened," in that there is a way to transcend the virtually inevitable end of the processes now underway, the processes advancing the minute hand on the Doomsday Clock.

We need lots of people trying to find out how to make that kind of transcendence happen. More eyes on Dupuy's book can't hurt. I'll report in as soon as I have found the secret.

It's now or never. More than ever.