#122 / The Billionaires Are Privatizing Space 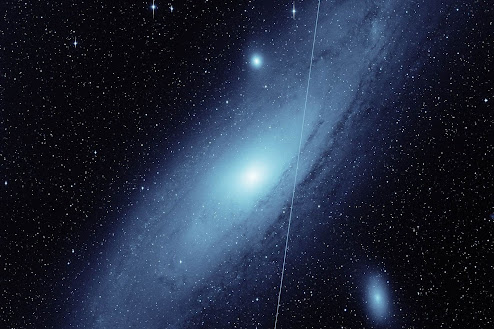 SpaceX is owned by Elon Musk, who competes with Jeff Bezos for bragging rights. Depending on the day of the week - and the recent gyrations of the stock market - either Musk or Bezos will likely be called the "wealthiest person in the world." Musk held that title, according to Wikipedia, on the day I mostly wrote this blog posting, February 7, 2022. Bezos was the "second-wealthiest." Like Musk, Bezos operates a "space company." Bezos' space company is called Blue Origin, and Bezos' company just launched its twentieth space flight on March 31, 2022.
The article that prompts this blog posting ran in The Wall Street Journal on February 7th. The article was titled, "SpaceX Satellites Distort Astronomy Images, Study Finds." That line through the picture above, showing the Andromeda galaxy, was taken in May 2021. A SpaceX satellite accounts for the line that has defaced an otherwise beautiful photograph of Andromeda, the nearest large galaxy to the Milky Way.
The SpaceX satellite captured in the image I have provided (with thanks to The Wall Street Journal), is part of a moneymaking scheme advanced by Musk, "Starlink," which Musk advertises as the "world's most advanced broadband internet system."
May I suggest that space, called "outer space" when I was younger, is not suitable for appropriation by individuals, or even nations? The space adventures of Musk and Bezos are making considerable contributions to global warming, as they blast into space. If - and that's a real if - it makes sense to utilize space for commercial activities, surely the benefits and the burdens should give all persons on this planet their proportionate share. Can space be privatized and made into a profit center for the billionaires? Really?
In the early days of radio, the federal government asserted the public's right to ownership of the "airwaves." How much more true it is that the space in which our planet moves belongs (if "belonging" is even an appropriate word) to every human being on the planet.
Do we really want to allow space to be privatized, for personal profit?
When this gets put to a vote (and there really needs to be a vote on that), I am voting "NO."
Image Credit:
https://www.wsj.com/articles/spacexs-starlink-satellites-are-photobombing-astronomy-images-study-says-11644062404
To Subscribe Just Click This Link