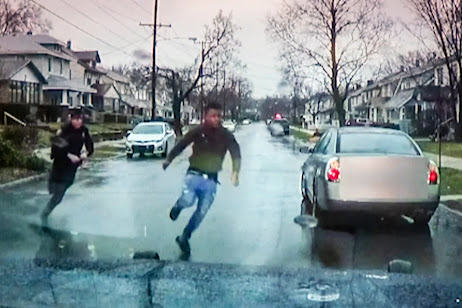 The guy in this picture will soon be dead. The Black guy, I mean! His name was Patrick Lyoya. The police officer chasing him, whose name is Christopher Schurr, will not suffer the same fate.
If you would like to read about the traffic stop pictured above, you can click this link, which will take you to a New York Times article by Kim Barker, Steve Eder and Julie Tate. Their article, published in The Times on April 27, 2022, was titled, "The Driver, the Officer and the Deadly Traffic Stop in Grand Rapids."
Here is an excerpt from that article that tells what happened:

The two men — the Black driver and the white officer — crossed paths on a rainy morning this month. Officer Schurr, 31, spotted Mr. Lyoya, 26, at the wheel of a silver sedan and followed in his cruiser, pulling the car over on a residential street. Mr. Lyoya, unarmed, stepped out of the vehicle.

“The plate doesn’t belong on this car,” Officer Schurr replied.

Over the next three minutes, a deadly encounter unfolded, captured in videos from a passenger riding with Mr. Lyoya, a home-surveillance system and the officer’s dashboard and body-worn cameras. After a foot chase, Officer Schurr pulls out his Taser, firing it unsuccessfully twice.

The officer then manages to get a wriggling Mr. Lyoya facedown on the ground and sits on his back. Two seconds after shouting for the last time for Mr. Lyoya to let go of the Taser — which can’t be seen at that point on the videos — Officer Schurr shoots him in the back of the head.

On the same day that The Times published its article about this horrendous, and deadly, and all too typical traffic stop, a racial controversy erupted during an episode of "Survivor," a television show now in its 42nd season. As Wikipedia explains to those who don't already know, the show "features a group of contestants deliberately marooned in an isolated location, where they must provide food, water, fire, and shelter for themselves. The contestants compete in challenges for rewards and immunity from elimination. The contestants are progressively eliminated from the game as they are voted out by their fellow-contestants until only one remains to be awarded the grand prize and [is] named the 'Sole Survivor.'"
That "Sole Survivor," the person who "survives," gets a million dollars.
"Survivor" fans (and I am not one of them) take this television competition extremely seriously. Apparently, many viewers were shaken by the "Survivor" episode that played out on the same day that the article about Mr. Lyoya's murder in Michigan appeared in The New York Times. This link will let you read all about that "Survivor" episode, and provides a video excerpt from the show, if you'd like to watch.
The gist of the controversy about the April 27, 2022, "Survivor" episode was that Black contestants on the show are, apparently, "voted off the island," as the expression goes, significantly more frequently than white people are. At least, that seemed to be what a number of the Black contestants were saying, raising an issue that has been largely suppressed. The fan I talked to about the controversy - a longtime viewer of the show - thought that complaints about this kind of discrimination against Black contestants were fully justified.
Think about it. Think about this complaint by Black "Survivor" contestants that they are being routinely denied a fair shot at that million dollar prize. Think about what Abibat Rahman-Davies writes about in a recent edition of the "Washington Newsletter" published by the Friends Committee on National Legislation. In her article, "The Cost of Racism Affects Us All," Rahman-Davies notes that "among Black families owning homes, properties do not appreciate at the same rate as properties held by other ethnic groups."
Think about what happens every day in the United States of America. Think about what happened in Grand Rapids, Michigan to Patrick Lyoya.
On "Survivor," Blacks are voted out, as contestants, more frequently than white people.
Maybe that's why they call it "reality TV."
As earlier disclosed, I am no fan of "Survivor," or of the other "reality television" offerings available. And I am no fan of the unacceptable and "real life" realities that took the life of Patrick Lyoya, either.
The only good thing I have to say about the unacceptable and real life realities that are so clearly part of our human world, on the streets of our cities and in our television studios, is that there is nothing inevitable about any of them. We can change those realities.
And so we must.
To Subscribe Just Click This Link
Image Credit:
https://www.nytimes.com/2022/04/27/us/patrick-lyoya-christopher-schurr-traffic-stop.html