#95 / The Canoe Theory Of Politics 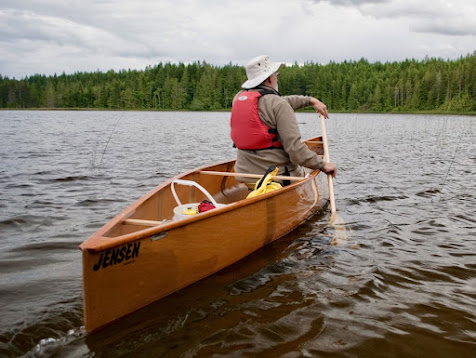 The former Governor of California, Jerry Brown, once described his "Canoe Theory" of politics to a gathering of high school students in Sacramento: "By paddling a little on the left, and then on the right, one can remain on a middle course."
Dan Walters, a columnist for Cal Matters, and a longtime observer of California state government, has never been much of a fan of Jerry Brown. As Walters described Brown's "canoe theory of politics" in a 2018 commentary, in which he mentioned that meeting with the high school students, Brown's theory comes across as a kind of crass political maneuvering. Looking for a "middle course" is presented as an effort to make everybody happy - or if not exactly "happy," at least of a mind to tolerate the public official who is employing such tactics.
Surely, Walters impliedly suggests, our public officials should be trying to steer us on the "best" course, so we get to where we actually need to go. The "best" destination may or may not be a destination you will arrive at by cleaving, always, to "the middle."
I think that criticism is valid, and that Brown really was, mostly, talking about political "tactics," and that his "first on the one side, and then on the other side" approach to politics was intended, mainly, to keep him in office, as opposed to taking the state in the "best" direction.
That said, let me suggest a little bit different way of thinking about "Canoe Politics."
We are, in fact, as a political community, essentially split down the middle. And I don't mean by the kind of partisan divisions that are so evident and prominent right at the moment. Each one of is both an "individual," and a "part of the greater whole." We are both things, simultaneously, and we need to make sure our politics and public policy reflect this bifurcated truth about our human situation.
The fact that we are both individuals and parts of the whole, simultaneously, dictates a politics that will emphasize, sometimes, the need to liberate individuals from collective constraints, and that will emphasize, at other times, the need to act collectively, to make sure that our individual efforts and actions add up to results that will benefit the community as a whole.
While Jerry Brown was a canny and very "political" public official, I don't think his "Canoe Theory" was just political tactics, pure and simple. Our real situation requires us to be sure that we do not give too much deference to individualism, while at the same time not allowing a concern for the collectivity to lead to the suppression of individual freedom.
As is so often the case, the "truth" about our situation is that we must recognize that more than one thing is "true," simultaneously. We need to find ways to make sure that our political life together recognizes this reality.
Was Jerry Brown, a canny politician? Yes! No doubt of that. But his "Canoe Theory" is also speaking to something quite profound about the political world in which we live. The "middle" is not where we want to arrive. We want to arrive at the "best" place, but that will mean that we must paddle on one side, sometimes, and on the other side, other times. We need a politics that elevates the individual, and we need a politics that honors the community. Both/And, not Either/Or.
For my part, thinking about current conditions, and specifically about the damage that human-caused global warming is doing to the Natural World, I think it's about time to start taking some strong strokes towards protecting the "collective" nature of our human reality here in the United States. I guess that means, to use the Brown metaphor, that we probably need to paddle "left," right at the moment, and favor our common causes, to save the common world which is, ultimately, our home.
Image Credit:
https://outdoors.stackexchange.com/questions/7101/what-is-the-most-effective-means-of-paddling-a-canoe-against-the-current-under
To Subscribe Just Click This Link