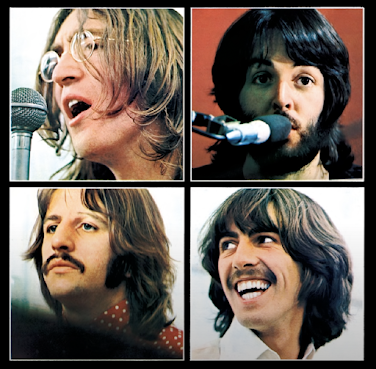 As I am going to confess right upfront, my blog posting for today is not about The Beatles. It is not, for instance - although I think that this might have been a worthy subject - a meditation on the recently-released documentary about The Beatles, titled, "Get Back."And it's not really about the The Beatles' song, "Get Back," either, though you can listen to that song by clicking this link, and you can review the lyrics by clicking this one. That image, above, in other words, is a kind of "false advertising," which characterization might be a species of redundancy. When you think about it, the term, "false advertising," in many cases, is just another term for "advertising."
At any rate, my apologies to those who might have been motivated to begin reading this blog posting because of the image I have chosen to head it up. The blog posting is really a brief commentary on an article published in the December 31, 2021, edition of The New York Times, with a headline (in the hard copy version), "Israel Dispatch: Is It a Burning Bush? Mt. Sinai? Solstice Bolsters a Claim."
I will say, in defense of the use of that picture of The Beatles, that the phrase "Get Back" popped into my mind as I read the New York Times' article, which is my explanation of and excuse for the misleading image I chose to illustrate my thoughts on a non-Beatles topic.

[Those specifically interested in The Beatles can now exit this blog posting with full confidence that they will not miss any comment I might have on The Beatles. Readers can be armed with my solemn assurance that the Beatles will not be mentioned any further, though I can make no such commitment to keep Bob Dylan out of my commentary, as I begin to write on my actual topic for today.]

oooOOOooo
The Times' article I have mentioned, by Isabel Kershner, reports on a solstice visit to Mount Karkom, in Israel, which certain archeological and other evidence indicates may be the biblical "Mount Sinai," the place where Moses talked to God, in the form of a burning bush, and where the Ten Commandments were delivered. Professor Emmanuel Anati, who has advanced the propositions just outlined, was present on the occasion of this visit to Mount Karkom, to promote his books on this topic. I thought that this was a nice commercial touch.
I was interested in the article because of my general interest in God, and in God's appearance to fallible human beings, and in documented instances of such encounters, found in the historical record, many of which encounters, of course, are told about in the Bible.
The Bible does present itself as a true accounting of the historical relationship between God and human beings - from the Garden of Eden on down. Many, of course, consider the Bible to be infallible and true, but at least as many people think that the Bible is just a bunch of "old stories." The Times' article was dedicated to testing one such "old story," namely, the story that God appeared to Moses, on Mount Sinai, in the form of a "burning bush."
As it happens, at the very place that Professor Anati has said is the historic Mount Sinai, it is possible, right at the Winter Solstice, to see what might be described as a "burning bush," appearing on what Isabel Kershner describes in her article as a "sheer rock face." This discovery was made, in 2003, by a local Israeli guide and ecologist. Despite the apparent validity of a "burning bush" reality, with the possibility that this is a validation of the "old story" about what happened on Mount Sinai, there is anything but unanimity about what the phenomenon means, and critics of Professor Anati have not capitulated; they most emphatically don't think Mount Karkom is Mount Sinai.
We are, I thought, upon reading the article, always trying to "Get Back" to the truth of what we have been told are the historical events of significance that are the foundation of the reality we experience in the present day. As someone who majored in history, as an undergraduate, and who has a lot of history books shelved in his dining room, I share in the "Get Back" quest. It's hard enough to know what the truth is about current events (what real relationship, if any, for instance, is there between Vladimir Putin and Donald Trump?). How much more difficult it is to know the truth of stories like those in the Bible - and I include both the Old and the New Testaments.
Thinking specifically of the "old stories" in the Bible, it seems to me that we are hoping, as we try to "Get Back" to the truth of these stories, either to validate the claims made, based on the stories, or to disprove them. In fact, we cannot, in the end, "get back to where we once belonged." We live in this present moment, and we should realize that the persons who wrote down those "old stories" were in exactly the same position. They lived, as we do, in the present, and the stories they told about their then-present experiences are going to be subject to the kind of distortions that we know creep into our own reports of what is going on, right now, in our present day.
So, validation of some of the "facts" about things mentioned in the "old stories" from the Bible won't, themselves, "prove" the claims made about the significance of the stories. As Bob Dylan might have said (actually, he did say it), "you either got faith, or you got unbelief, and there ain't no neutral ground."
Dylan also said, speaking of that "Everyman" figure, "Mr. Jones," that "something is happening here, and you don't know what it is, do you.....Mr. Jones?"
I like history, even though I know that it won't really get me back to the realities of the past. Validations of some of the "old stories" from the Bible make me think that the reports made, from figures no more reliable in their reporting than we are, at least demonstrate that "something was happening there," and that those who reported on it felt it was significant. Something happened involving Moses and the Twelve Tribes - and it happened on Mount Sinai, wherever that mountain was, or is. Something happened in that Garden of Gethsemane, too.
There is no absolute "proof" of anything we read about in the Bible (or in The New York Times, either, as far as that goes). We will never know exactly what happened on Mount Sinai, and what its significance was. Still, when burning bushes appear on Mount Karkom, we all have to figure out what we believe, and act accordingly.
In the present!
To Subscribe Just Click This Link
Image Credit:
https://youtu.be/IKJqecxswCA