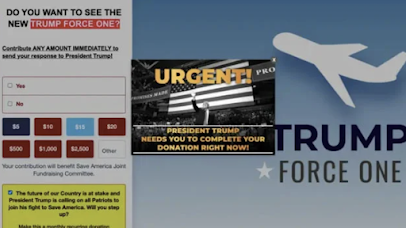 Donald J. Trump is raising money for a "Trump Force One" airplane (see above, and/or click this link). Since our former president claims to be a billionaire, one might ask oneself why he needs to seek donations to get himself the ride of his dreams. I have an answer for that, coming up shortly - and the explanation (calling on Jesus for expert testimony) will be somewhat of a surprise to many, I feel certain.
First, though, some background. As you may know, our former president recently received a significant scare. A supporter's private jet, taking Mr. Trump home after a fundraising trip, lost an engine over the Gulf of Mexico, but (luckily for Mr. Trump) the plane was able to make it back to New Orleans with no lives or luggage lost. The other alternative was that the plane, lacking enough power to stay aloft, might have crashed into the sea. You can see why Mr. Trump might want to stop relying on planes over which he has no direct control, and provision himself with his own plane. You can also see why Mr. Trump's supporters - those who dearly love our former president - might want to chip in.
Beyond these practicalities, however, there is another and slightly different explanation for this fundraising gambit, which an acute observer with some theological background might discern. Jesus is known to have said (Matthew 6:21):
Where your treasure is,
there will your heart be also.
For non-churchgoing folks, who might not have had this experience themselves, this Bible verse is typically intoned just as the pastor is directing that the collection plates be passed. The idea is that because you value the church, you should drop in some dollars to provide support.
Literally, though, the statement Jesus made is not an appeal for funds; it is a sociological or psychological observation, and it happens to be an accurate one. Jesus was pretty smart, and that's true whether claims for his divinity are accepted or not.
What this verse says, literally, is that we will care about and support causes and people to whom we have given money.
That claim is different from a claim that if you care about something you should give money. The latter claim may well be true, but what the Bible verse claims, as a kind of psychological or sociological truth, is that if someone has given some money to something, or to some person, they are going to care about and treasure that something, or somebody, and will direct their affections to the place that their money has gone.
So, why does our former president (alleged billionaire) want his supporters to donate? Why does any politician, or nonprofit, or anyone else want to stimulate donations? For the money, true! But perhaps even more importantly, to build commitment and allegiance.
Keep that truth in mind, and give everything you can to whatever cause you believe in, because that's what will solidify your commitment, and give you the passion and strength to carry on and, ultimately, to prevail.
But be careful, too. A contribution to, and an investment in someone like Donald J. Trump can lead you right up those steps to the Capitol, and put you in the middle of an invasion and insurrection with consequences uncontemplated when you first pushed that online button to donate.
Image Credit:
https://www.thedailybeast.com/trump-begs-fans-for-cash-to-fund-new-trump-force-one-plane
To Subscribe Just Click This Link