#106 / Inside The Reality Distortion Field 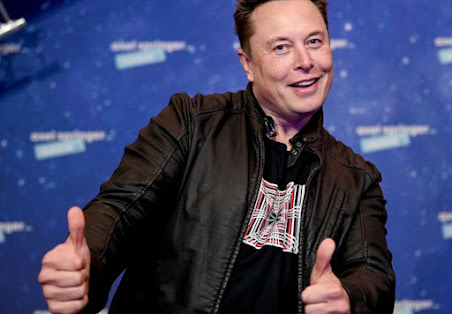 I am not a big fan of Elon Musk, who is pictured above. One can hardly escape hearing about Musk, though, and I did read all about Musk's offer to buy Twitter, which Wikipedia describes as "an American microblogging and social networking service."
I tend to think of Twitter as an online platform for big-mouth presidents to spout off about whatever strikes their fancy. I presume you know who I mean, when I say "big-mouth presidents." I presume you also know that Twitter took away former president Trump's Twitter privileges after Mr. Trump left office, and that there is speculation that one reason that Musk might want to buy Twitter is to restore those privileges to our former president.
But what about this proposed purchase? Twitter is currently a "public" company, owned by its shareholders, and the news story is that Musk would like to turn the company into his own private domain, where Musk could make all the rules, and is offering to buy out all of the other shareholders for $54.20 per share, or about $43 billion in total.
Yesterday, The New York Times ran a number of articles on this proposal, and several of them appeared on page B6 of the hard copy edition, under an overarching headline proclaiming, "A Media Baron for the Digital Age?" Online, the headline is a bit different (but along the same lines): "Elon Musk Is a Digital Citizen Kane."
One article that appeared in The Times yesterday, focused on the Musk effort to buy up Twitter, included a statement that attracted my attention:

In a nearly hourlong interview, Mr. Musk publicly displayed what some have called his “reality distortion field,” a “Star Trek”-inspired term used to describe how successful business leaders like Apple’s Steve Jobs were able to convince workers that seemingly impossible visions could be realized. At Tesla and SpaceX, Mr. Musk’s reality distortion field has been lionized as a major reason his companies have succeeded in mainstreaming electric vehicles and privatizing space launches.

Whether you are a Musk "fan" or not - and I am not; let me repeat myself - it must be admitted that Musk has been able to propose, and to realize, ventures that were "seemingly impossible." I think it is important to highlight this fact, and to give credit where credit is due. Musk has demonstrated, on a number of occasions, that what "seemed" impossible was not impossible at all. In other words, Musk's career can provide us proof of what I think is an important insight about what we can accomplish in what I call our "human world."
Within our world, the world in which we most immediately reside, and which is, in the end, a human creation:
Nothing Is Impossible
The Times' article says that Musk, Steve Jobs, and others are sometimes able to call up a "reality distortion field," but pay attention to that word "reality." It isn't, actually, "reality" that these powerful people have distorted. Our flawed understanding of "reality" is what is distorted, and it is "reality" that is revealed when we actually accomplish things that we have deemed to be "impossible."
In other words, what we think of as a fixed and permanent "reality" (what exists now) is not "inevitable," as we oftentimes suppose. A belief that what already exists defines "reality" is the actual "distortion."
If "nothing is impossible" within the human world that we create (and if that is a "reality" that we fail, ordinarily, to see), then what Musk and other leaders do is not to "distort" reality, but to make our possibilities clear. "Possibility," in fact, is the true reality we fail to notice.
Even though I am not a fan of Elon Musk, let's applaud him when he is able to help us see that truth! And let us realize one more thing: EVERYONE can do what is "seemingly impossible." That is the genuine truth about what many think of as "reality." Usually, it isn't easy to transform what currently exists into something different, but the "reality" is that we live, most immediately, in a realm of "possibility," and that is the real "reality" that we sometimes fail to see.
To Subscribe Just Click This Link
Image Credit:
https://www.marketwatch.com/story/twitters-board-owes-it-to-shareholders-to-accept-elon-musks-offer-11649965139