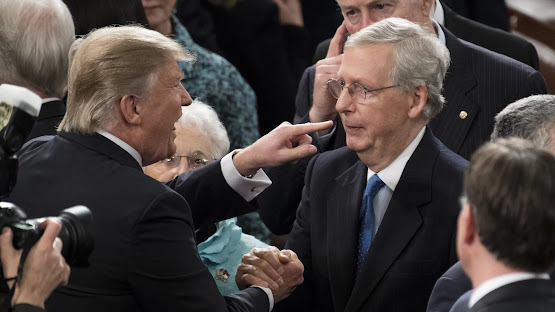 I presume you will recognize the two persons in the middle of this picture. On the left is an irate former president Donald Trump; on the right is Senator Mitch McConnell, who seems to be trying to keep it together and stay calm.
These two men are both "leaders" of the Republican Party, and their hands are clasped, but one of my mother's favorite sayings does not apply: "Birds of a feather flock together."
As I am recalling it, my mother used that old English proverb mainly to speak about those of whom she disapproved. That saying sprang immediately into my mind when I saw the picture above, but I quickly realized that it wasn't really apropos. Though I thoroughly disapprove of both of these guys, both of them ominous birds of prey, in my estimation, they do wear "different feathers." I can't accurately lump them into the same category. Trump is sui generis! He makes the "Tinder Swindler" look tame!
If you would like to read the article from which I got the picture at the top of this blog posting, an article that details the differences currently dividing the Republican Party and that asserts that the Republican Party is no longer a unified flock, then click right here. NPR suggests that the divisions within the party, and the competition between the two political scavengers pictured, might snatch a Republican Party defeat right out of the jaws of probable victory, as our nation heads into midterm elections this year, with control of Congress, and certainly the Senate, definitely up for grabs.
Here's another old phrase, and one that seems to fit, when I consider that possibility:
Ojalá
To Subscribe Just Click This Link
Image Credit:
https://www.npr.org/2022/02/15/1080407022/trump-vs-mcconnell-latest-round-between-gop-heavyweights-has-the-highest-stakes-