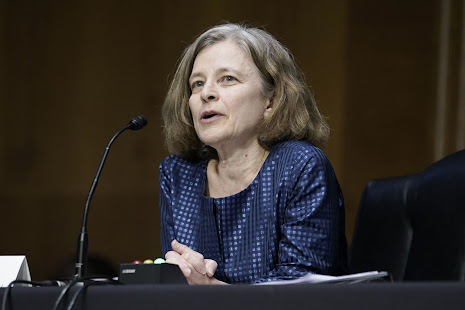 Sarah Bloom Raskin on Tuesday withdrew her nomination for vice chairman of the Federal Reserve, and the message of her defeat is more important than the fate of one would-be regulator. Her defeat is a warning to the Fed that a majority of the Senate doesn’t believe the central bank should use its power to allocate capital for political purposes.

I was struck by a line in The Wall Street Journal's March 16, 2022, editorial statement on the decision by Sarah Bloom Raskin to withdraw her nomination for vice chairperson of the Federal Reserve. Specifically, I found the line referencing "political purposes" as massively disingenuous.
An article in The New York Times, also published on March 16, 2022, outlines what happened. Raskin is a proponent of "tougher bank regulations," according to The Times. In addition, Raskin "had written an opinion piece in September 2021 arguing that 'U.S. regulators can — and should — be looking at their existing powers and considering how they might be brought to bear on efforts to mitigate climate risk.'” In other words, Raskin would probably support tougher bank regulations and would possibly support regulations that would disadvantage the oil industry. When Senator Joe (call me a coal bro) Manchin announced he would not vote to confirm Raskin's nomination, her appointment was dead in the water.
Here is what is disingenuous about The Wall Street Journal's editorial: her defeat is NOT a warning that "a majority of the Senate doesn't believe the central bank should use its power to allocate capital for political purposes." What her defeat shows is that the "political purposes" that the United States Senate currently advocates are political purposes that benefit the big banks and the oil/coal industry.
All "policy" is "political." The regulatory and other decisions that determine what happens in the United States of America are the product of political choice. The following "equation," which I teach to Legal Studies students at the University of California, Santa Cruz, tells us how "politics" relates to the policy choices that determine what the government does:
POLITICS > LAW > GOVERNMENT
To understand what this statement means, begin at the right, and work towards the left. "Government" is how we "govern" our economy and society. "Government" is what happens in the real world we all inhabit. "Law" is the name we give to the rules and regulations that determine how we govern. Finally, and people tend to forget this, our "laws" are the product of "political" choices.
That this "equation" is true is not a problem. It's a "feature," not a "bug." We are often led to believe (as by The Wall Street Journal editorial) that "politics" is a "dirty word," and that our policy decisions should be "above politics," or in some way disconnected from politics. Quite the opposite!
In fact, there are different ideas about what we should, collectively, do, at every level at which our government operates. Often, there are good arguments for various, different, policy positions and proposals. Our democratic system proposes that the decisions about how we actually govern our affairs should be made by the rough and tumble of political debate and decision. "Laws" only get adopted if a majority of our elected representatives vote for them. And "laws," of course - the kind that govern our human world - are always subject to change.
But to change the "law" requires us to change the politics that gives us the law. It is amazing how often people seem to overlook this democratic truism. If we don't like how the government is operating, we can change the laws, but we need to get politically active, and organized, to make that happen. It ain't easy!
The fact that Sarah Bloom Raskin's nomination was defeated (that she was forced to withdraw, since there was no way she could be appointed, given the current composition of the United States Senate) is not a demonstration that "the Senate doesn’t believe the central bank should use its power to allocate capital for political purposes."
The defeat of Raskin's nomination is a demonstration that the political purposes that currently find support in the Senate do not include using financial regulatory mechanisms to confront the climate crisis, or to regulate big banks in new ways that might benefit the general public.
In other words, since the climate "crisis" is an impending "catastrophe," and we actually all know that, there is a lot of "political" work to do, to save human civilization.
It's about time we get on it!
Image Credit:
https://www.wsj.com/articles/the-message-of-sarah-bloom-raskins-defeat-federal-reserve-nomination-senate-11647382096
To Subscribe Just Click This Link