The Wall Street Journal ran an article in its Saturday/Sunday, March 12-13, 2022, edition: "The West's Economic War Plan Against Putin." In this opinion piece, Tunku Varadarajan, the Virginia Hobbs Carpenter Research Fellow in Journalism at the Hoover Institution, told us something that we all want to hear: the economic sanctions put in place by the United States, after Russia invaded Ukraine, caught Vladimir Putin by surprise, and have the potential to turn Russia into "North Korea on the Volga." In other words, "we got him!"
Of course, it might be expected that the economic sanctions that the United States has imposed will be resisted, so Varadarajan does admit the possibility that Russia and China might "collaborate to develop an alternative financial system that makes both nations sanctions-proof." However, he discounts that possibility.
Michael Hudson, however, writing in CounterPunch, has a different view. Hudson has authored a book called, Super Imperialism: The Economic Strategy Of American Empire, and his article in CounterPunch rehearses the theme of his book. It is titled: "The American Empire Self-Destructs, But Nobody Thought That It Would Happen This Fast."
It is Hudson's contention that the United States has based its domination of world politics, its "empire," on the status of the dollar as the default world currency, and that the way the United States has used this advantage, as its counter to Russia's invasion of Ukraine, puts all of these arrangements in peril:

During the half-century since the United States went off gold in 1971, the world’s central banks have operated on the Dollar Standard, holding their international monetary reserves in the form of U.S. Treasury securities, U.S. bank deposits and U.S. stocks and bonds. The resulting Treasury-bill Standard has enabled America to finance its foreign military spending and investment takeover of other countries simply by creating dollar IOUs. U.S. balance-of-payments deficits end up in the central banks of payments-surplus countries as their reserves, while Global South debtors need dollars to pay their bondholders and conduct their foreign trade.

This monetary privilege – dollar seignorage – has enabled U.S. diplomacy to impose neoliberal policies on the rest of the world, without having to use much military force of its own except to grab Near Eastern oil.

The recent escalation of U.S. sanctions blocking Europe, Asia and other countries from trade and investment with Russia, Iran and China has imposed enormous opportunity costs – the cost of lost opportunities – on U.S. allies. And the recent confiscation of the gold and foreign reserves of Venezuela, Afghanistan and now Russia, along with the targeted grabbing of bank accounts of wealthy foreigners (hoping to win their hearts and minds, enticed by the hope for the return of their sequestered accounts), has ended the idea that dollar holdings – or now also assets in sterling and euro NATO satellites of the dollar – are a safe investment haven when world economic conditions become shaky.

So I am somewhat chagrined as I watch the speed at which this U.S.-centered financialized system has de-dollarized over the span of just a year or two. The basic theme of my Super Imperialism has been how, for the past fifty years, the U.S. Treasury-bill standard has channeled foreign savings to U.S. financial markets and banks, giving Dollar Diplomacy a free ride. I thought that de-dollarization would be led by China and Russia moving to take control of their economies to avoid the kind of financial polarization that is imposing austerity on the United States. But U.S. officials are forcing Russia, China and other nations not locked into the U.S. orbit to see the writing on the wall and overcome whatever hesitancy they had to de-dollarize.

It seems to me that Hudson has a good point. I recommend reading his article, so you can make up your own mind. For Americans, it is hard to see how the United States might come across to others as self-aggrandizing and arrogant, an international bully - and Russia's invasion of Ukraine makes it particularly difficult, at the moment, to see the United States as anything but a global "good guy." Just one word, folks: "Iraq."
If there is any validity to Hudson's hypothesis, maybe the United States had better start rethinking that empire-building economic system that is so advantageous to the United States - and maybe not nearly so great for everyone else! 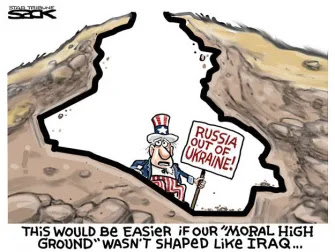