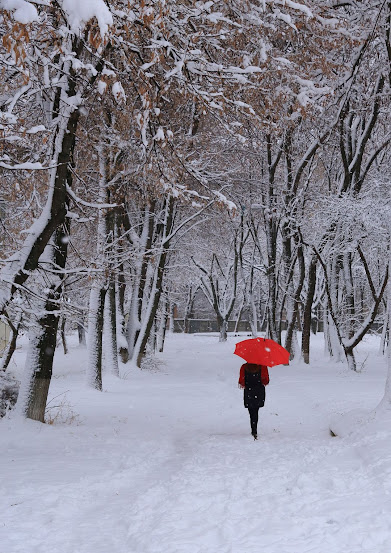 The picture above comes from the March 11, 2022, edition of Heather Cox Richardson's "Letters from an American." Richardson's letters, which I read daily, are an invaluable meditation on American history as it is being made. The picture is by Nadia Povalinska, the Foreign Language Department Chair at the Kyiv Christian Academy, who is a friend of Richardson's. Povalinska is from Ukraine, and so is the picture. As Richardson says, it is an image "from before the war, just a few weeks and a lifetime ago."
As it happens, I was quite impressed by a story I read, also on March 11, 2022, and the story comes, like the picture, from Ukraine. The story I am talking about, "In Search of Eternity," is an excerpt from a soon-to-be released novel, Brisbane, by Eugene Vodolazkin. The story was published in the Spring 2022 edition of Plough Quarterly. I found it quite affecting, and I commend it to you.
Clicking this link will take you right to the entire story. Here is a synopsis, by way of an abridgment and some slight modifications. The very last line is what delivers the story's lesson:

In Soviet Ukraine in 1979, Gleb Yanovsky, a fourteen-year-old guitar prodigy, drops out of music school after witnessing a young girl drown.

Hearing that Gleb had abandoned music in view of the death that awaits each one of us, Gleb's father said that this was the act of a genuine musician. That the distinguishing trait of a musician was not the dexterity of his fingers but the constant thought of death, which should instill us with optimism, not horror. An actual conversation about this took place not between Gleb and his father, however, but between Gleb and his grandfather, Mefody.

Somewhat to Gleb's amazement, Mefody found it quite natural that Gleb would quit music school once he became aware of the presence of death, since why would anyone need music school if everything was ending in we-know-what.

Mefody brought Gleb to meet one of Mefody's friends, Father Pyotr, who professed also to agree with this logic, and who gave Gleb a New Testament, a catechism, and a prerevolutionary textbook, "Divine Law." Gleb was caught reading this book in school, definitely not permitted, and the communist teacher in his class turned Gleb into the principal, to be disciplined for possessing and reading this unsanctioned and anti-communist material. Gleb is told he must have a family member come to the school, to meet with the principal, and Gleb gets his grandfather to agree to do so, with the grandfather appearing to have no fear at all about what might be in store for Gleb, and maybe even his family.

The meeting between the grandfather and the principal, which happened after another visit by Gleb and his grandfather to Father Pyotr, went rather well. Mefody’s gray hair made a favorable impression on the principal, who began her conversation with him with what seemed to her an irrefutable argument.

Returning the confiscated book to Gleb’s grandfather, she took Mefody by the elbow rather theatrically and led him to the window. Pointing to the sky, she said, “Yuri Gagarin flew in space but did not see God. You agree?” Mefody politely bowed his head: “True, Yuri Gagarin did not see God.”

Not tearing himself away from the sky in the window, the old man smiled broadly, addressing the principal, “but God saw him."

This is a nice story for a Sunday, the kind you might get in church - in Father Pyotr's church in Ukraine or in any church, anywhere. What we can know for certain - and that means everything we can know for certain - pertains to the things we do ourselves and that we have done ourselves. The world over which we assert dominion, and about which we can claim to know all, is the world that we ourselves have created. We have done such marvelous things. We have gone, like Yuri Gagarin, into space. That is just a sample of our extraordinary and wondrous accomplishments.
But the world in which we do our work, and do our deeds - the "human world" that we create - is not the only world in which we live. The World of Nature, upon which we, and our world, ultimately depend, is a world we did not create. We might be wise, Gleb's grandfather suggests, not to claim that we know more than we can actually know.
To Subscribe Just Click This Link
Image Credit:
https://heathercoxrichardson.substack.com/p/march-11-2022?s=r