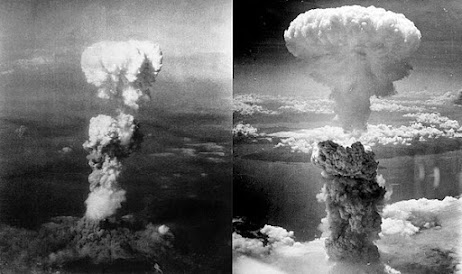 Most of the Russian and U.S. bombs are more than ten times more powerful—in explosive yield—than the bombs that destroyed Hiroshima [pictured above left] and Nagasaki [pictured above right] and killed about two hundred and fourteen thousand people by the end of 1945, according to the Arms Control Association.*

Dmitry Kiselyev, a longtime Kremlin propagandist who is known as one of the most sulfurous personalities on Russian television, opened his state television program on Sunday [February 27, 2022] with a rundown of Russia’s nuclear arsenal. “In total our submarines are capable of launching over five hundred nuclear warheads, which are guaranteed to destroy the U.S. and all the countries of NATO to boot,” he said. “That’s according to the principle, ‘Why do we need a world if Russia’s not in it?’ ” He went on, “We’re not even going to talk about the strategic rocket forces. . . .Putin warned them. Don’t try to frighten Russia.”**

In the March 1, 2022, edition of The New Yorker, the magazine explores this topic: "What Does Putin's Nuclear Sabre Rattling Mean?" It appears that The New Yorker may believe that Putin's sabre rattling is an "epic bluff," albeit author Robin Wright does go on from that statement to make some further observations:

Putin’s repeated references to nuclear arms have succeeded in suddenly putting the subject of bombs back into public consciousness after decades of assumptions that the atomic threat was of a bygone era, bounded by the detonation of the first nuclear bomb in 1945 and the seeming end of the Cold War in 1989. The Russian bellicosity followed a little-noticed decision by Belarus in December (that was approved last week) to change its constitution and allow Russia to deploy tactical nuclear weapons within the country, which borders Ukraine and also three NATO members—Poland, Lithuania, and Latvia....

Gustav Gressel, a senior policy fellow at the European Council on Foreign Relations, told me. “There is no other tool available in Putin’s hand to change this but to play with the fear of Europeans from nuclear war. But it’s a game of brinkmanship, nothing more.”

I was struck by the conclusion to Wright's article (the last paragraph of the article is reproduced immediately above). We are left with the suggestion that Vladimir Putin's threat to use nuclear weaponry on any nation that might oppose his invasion of Ukraine is "brinkmanship, nothing more."
Don't we all wish! Some people (Caitlin Johnstone and yours truly, for instance) aren't quite so certain that there is nothing to worry about.
In fact, that "brinkmanship, nothing more" statement reminded me of the statement published in The New York Times a week or so ago, and featured in one of my earlier blog posts. Anna Maklakova, a young woman who was leaving Kyiv in advance of the threatened Russian invasion, didn't really buy into the idea that such an invasion would actually take place. Here was her reaction:

I mean come on, it is the 21st century,” she said. “How could there be such a thing?

Well, as we are now seeing, the fact that we are living in the 21st century has not prevented Russia's threatened invasion of Ukraine from taking place. Similarly, the fact that it would be infinitely stupid ever to fire off those nuclear weapons described by Dmitry Kiselyev doesn't mean that they won't get fired off.
Right now, the United States of America is the only nation that has actually utilized atomic weapons against civilian populations (check the photos provided). Russian leaders might wonder why they shouldn't get the chance to kill hundreds of thousands of non-belligerent people, too. Or even millions, given the increased power of current weaponry.
To me, that seems kind of stupid. Don't you agree? I mean come on, it is the 21st century!
Nonetheless, 21st century or not, "the subject of bombs" has now been raised by Putin's nuclear threat (which is coupled, let us not forget, with an absolute ability actually to carry out the threat he has made). What if he did it (stupid as that might be)?
Let's try to get a little bit ahead of the curve and think about what the United States would do (or should do) if Vladimir Putin gave the order to use atomic weapons against whatever nation or nations he decided to use them on. His threat, after all, is on the table.
Suppose he does it? What happens then? What should the United States do?
Well, we could certainly fire back. That's one option. That is sort of an "end of the world" choice, don't you think? Clearly, that's the reaction Dmitry Kiselyev expects, and that he thinks is most likely. He understands that if Russia uses nuclear weapons it will likely be the end of the world (certainly the world as we know it), but Kiselyev apparently believes that this is not anything that should prevent the use of nuclear weapons. After all,  from his perspective, "Why do we need a world if Russia’s not in it?"
What about us? Would Americans want a world even if we weren't in it - or in charge of it?
I am voting for the world.
I am voting that way even if the United States is not in it, and even if the United States is not running it. So, trying to get ahead of that hypothetical curve, I say, we don't fire back.
If any nation uses nuclear weapons, it simply does not make sense for other nations to use more of them. Any use of nuclear weapons does very promptly lead to an "end of the world" scenario. Any thoughtful person who is thinking, right now, about "the subject of bombs" must certainly be thinking exactly that.
I would like to suggest a best case scenario, given where we are right now. We are living under the dread threat that Vladimir Putin will launch a nuclear attack at some point in the near future. It just might be possible that having heard Putin's threat (whether ultimately executed or not) the United States will really think about the result of a "mutually assured destruction" scenario. Maybe, having had to confront the reality of what "mutually assured destruction" truly means, the United States might not only not "fire back"; it might promptly move to eliminate all of its nuclear weapons - to take them off the table - which is the only logical and right thing to do. That could be a really positive outcome of our current, truly dangerous, situation.
When we see where we actually are (the fact that we are living in the 21st century notwithstanding), it is clear that the current system of mutually assured destruction is fatally flawed, and has brought us to the precipice it is named for: namely, "mutually assured destruction." The presence of nuclear weapons in our world may be about to blow up in our faces. As soon as any country actually goes beyond "brinkmanship," and uses one of those nuclear weapons against another nation, the idea is that whatever nation or nations are on the other side should promptly retaliate, and fire off its weapons, and then the ultimate result is clear. Game over!
We need multilateral nuclear disarmament - the total and absolute elimination of all nuclear weapons, by all nations, everywhere. That is what ordinary people expect of all nations, now that we're in the 21st century. I mean, come on!
Somebody, however, has to lead the way. Somebody has to go first. In other words, "multilateral" nuclear disarmament begins with some nation engaging in "unilateral" nuclear disarmament. I'm suggesting that the United States of America is the nation that has to do that. We're the nation that has to go first.
To Subscribe Just Click This Link
Image Credit:
https://en.wikipedia.org/wiki/Atomic_bombings_of_Hiroshima_and_Nagasaki
Quotation Credits:
* https://en.wikipedia.org/wiki/Atomic_bombings_of_Hiroshima_and_Nagasaki
** https://www.newyorker.com/news/daily-comment/what-does-putins-nuclear-sabre-rattling-mean