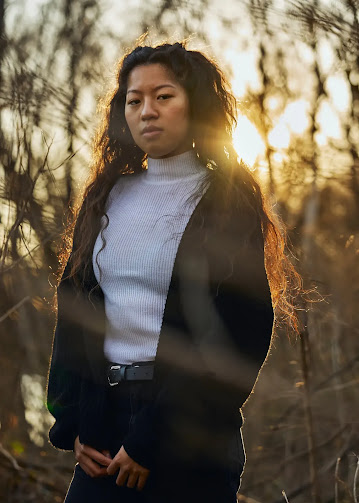 Niki Hutchinson, pictured above, succumbed to a scam, propagated on a dating app, and was swindled out of hundreds of thousands of dollars. Despite my headline on this blog posting, it was almost certainly not "THE" Tinder Swindler who managed to scam Niki Hutchinson. I have talked about "The Tinder Swindler" in an earlier blog posting, and we actually know who he is. As an article in The New York Times makes clear, the true identity of the person who tricked Nicki Hutchinson is not known.
Given the likelihood that those reading this blog posting might run into a paywall problem when they attempt to connect to The Times' article linked above, I'll include a summarizing excerpt from the article below. The scam that The Times has documented has three components: (1) cryptocurrency; (2) connections forged in the "unreal" world of the internet, instead of in the "real world," which means a "world" that includes actual bodily contact and physical presence in the same physical location at the same time, and (3) romance.
I am generally favorable towards "romance," but I have frequently inveighed against "cryptocurrency." In this blog posting, let me add a caution against thinking that "connections" of any kind, made in "cyberspace," or on the "internet," or in the "metaverse," are actually "real" connections. They aren't! "Romance" can be great, but as to those other two elements of the scams documented in The Times' article, here's my advice:
Be Aware! / BEWARE!
I think "cryptocurrency" is pure speculation, nothing less, and putative "connections" made in "cyberspace," on the "internet," or in the "metaverse" - in any non-physical location - should never be relied upon. Connections initially made "online" must be upgraded to connections perfected in the "real world." I think that's what The Times article is telling us. That is good advice when you are searching for love (in all the wrong places, quite likely), or when discussing politics and public policy.
Here's that promised excerpt from what The Times has to say about online scammers:

Niki Hutchinson, a 24-year-old social media producer from Tennessee, fell victim to a crypto romance scam last year. She was visiting a friend in California when she matched on Hinge with a man named Hao, who said he lived nearby and worked in the clothing business.

The two continued texting on WhatsApp for more than a month after she returned home. She told Hao that she was adopted from China; he told her that he was Chinese, too, and that he hailed from the same province as her birth family. He started calling her “sister” and joking that he was her long-lost brother. (They video-chatted once, she said — but Hao only partly showed his face and hung up quickly.)

Ms. Hutchinson had just inherited nearly $300,000 from the sale of her childhood home, after her mother died. Hao suggested that she invest that money in cryptocurrency.

“I want to teach you to invest in cryptocurrency when you are free, bring some changes to your life and bring an extra income to your life,” he texted her, according to a screenshot of the exchange.

Eventually she agreed, sending a small amount of crypto to the wallet address he gave her, which he said was connected to an account on a crypto exchange named ICAC. Then — when the money appeared on ICAC’s website — she sent more.

She couldn’t believe how easy it had been to make money, just by following Hao’s advice. Eventually, when she’d invested her entire savings, she took out a loan and kept investing more.

In December, Ms. Hutchinson started to get suspicious when she tried to withdraw money from her account. The transaction failed, and a customer service agent for ICAC told her that her account would be frozen unless she paid hundreds of thousands of dollars in taxes. Her chat with Hao went silent.

Now, Ms. Hutchinson is trying to pull her life back together. She and her father live in their R.V. — one of the few assets they have left — and she is working with the local police in Florida to try to track down her scammer.

Given this story, I think it's clear why I am providing the advice I have given above. When "cryptocurrency" is involved, and when connections made "online" are involved, and perhaps particularly when "romance" is involved (though I continue to be pro-romance when it's a real life experience):
Be Aware! / BEWARE!
Image Credit:
https://www.nytimes.com/2022/02/21/technology/crypto-scammers-new-target-dating-apps.html
To Subscribe Just Click This Link