#53 / National Security And The Gordian Knot 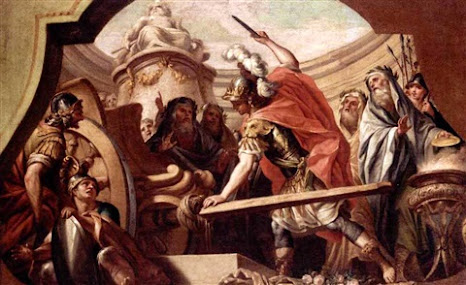 If you are not familiar with the story of Alexander the Great and the Gordian Knot, you can read up on the legend by clicking either this link or this one. The painting at the top of today's blog posting, depicting how Alexander solved the Gordian Knot problem, is by Fedele Fischetti, an Italian painter of the Neo-classical period.
Stanford University is now attempting to update Alexander's approach to the kind of problem-solving needed by empire builders, recently announcing the creation of "The Gordian Knot Center for National Security Innovation." I first heard about this initiative (funded by your tax dollars and mine) from Steve Blank, a Silicon Valley entrepreneurial type who has taught courses at Stanford called "Hacking For Defense." Here is a link to his November 30, 2021, blog posting on the creation of the Gordian Knot Center (GKC), his new taxpayer-funded educational effort, based at my alma mater.
Blank, at one time, served on the California Coastal Commission, where he did an excellent job protecting the California coast. I celebrated one of Blank's speeches at UCSC in one of my blog postings last year. That speech was about his work on the Coastal Commission, and it was, in fact, as I called it, a "pretty good speech."
While approving of Blank's contributions as a coastal protector, I have never been very impressed by his decision to use his considerable skills to place the world ever more firmly under the thrall of military solutions to the problems arising from our common life together on Planet Earth. I was, thus, distressed to hear about the GKC!
Identifying something as a "Gordian Knot," as Blank acknowledges in his November 30th blog posting, is to say that whatever is so described is an "intractable problem." What Blank calls "national security" is definitely such a problem - and a big part of the intractability of the problem may well be the very idea that our national "security" can actually  be achieved by pursuing that goal on a stand-alone basis and as an end-in-itself.
Despite my skepticism about the pursuit of "national security" as an independent end in itself - as opposed to pursuing things like economic security, for those without it, and housing security, for those without it, and health security for all of us - I know that many if not most people in the United States would applaud anything that claims it can provide "national security."
Our so-called "defense" budget, this coming year, is a testimony to that. Aimed at "defending" the nation, and providing us "national security," that budget will apparently be something more than $726 billion dollars. The money will go for planes, and bombs (including "improved" nuclear bombs), and drones, and advanced warfare technology of all kinds. That's what our representatives keep voting for. The "Gordian Knot Center" will be one more expense tied to finding military solutions to the problem of "security."
All that is bad enough - trying to provide "security" by preparing for war is self-defeating - but there is something even worse than that fundamental error in now opting for a way to apply "Gordian Knot" solutions to our most difficult problems.
We need to remember what the lesson of that "Gordian Knot" legend is intended to teach. When faced with a difficult problem. Alexander just "cut the Gordian Knot" and denied that the problem presented had to be solved at all. He just ignored the problem and went on to conquer Asia. The Gordian Knot Center is proposing a similar approach, saying that the GKC will help train people to solve those "intractable" problems that are hard to unravel by developing "deep problem understanding," and then "acting quickly" and employing "rapid solutions." This is a typical Silicon Valley approach, which promotes the "move fast and break things" philosophy as the ideal way to model problem solving.
Do we really think Alexander was employing "deep problem understanding" when he wielded that sword? Can we really fool ourselves into thinking that the problems that Blank and his collaborators identify (listed below) can be "solved" on the model of Alexander - with the "move fast and break things" approach?
Here are the problems the GKC identifies, with my gloss on Blank's terms in parentheses:

"Cutting to the chase," using power and the sword instead of unraveling the difficulties when faced with problems like these, is not the way to promote "national security."
Quite the opposite!
Image Credit:
http://www.artnet.com/artists/fedele-fischetti/alexander-cutting-the-gordian-knot-H0YlQwMBmYDvXYsrZYV1Ig2
To Subscribe Just Click This Link