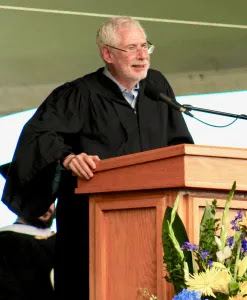 Pictured is Steve Blank, who is a high-tech entrepreneur, and a consultant, and an instructor at Stanford University, among other things. He is shown giving a commencement address at the University of California, Santa Cruz, in 2019. The speech was presented to students graduating from Rachel Carson College, UCSC's most specifically "environmental" college. The speech is based on Blank's past experience as a member of the California Coastal Commission.
Having followed the Coastal Commission for almost fifty years, I have to say that this is a pretty good speech. I am recommending it, particularly if you have positive views about California's coastal protection law, but don't really know too much about how it all works, and particularly about how the Coastal Commission works. To watch a video of Blank's speech, click right here. His remarks begin at 27:00. To read the speech, here's the right link to click.
Blank gives us four "stories," and they're good ones. First, he tells us that "the smartest person in the room isn't the most effective." Well, that's certainly true! Blank did his homework, and read the (literally) hundreds of staff reports presented to Commissioners to study for each meeting, but the person who "got the votes" was the one who was most effective. And that person, Blank is too polite to say it out loud, was not always on the side of coastal protection.
Pursuing that same theme, Blank's second story points out that "misdirection can beat truth." It often does! When it does, coastal resources are the loser.
Third, Blank says we need to "follow the money" as we think about who is doing what, and to whom. Let me second that motion!
The final story Blank tells is that genuine changes come from those who can "inspire others." That last point is at least as important as all the others. Protecting our natural environment from those who want to make money, first and foremost, who will use misdirection and whatever other tactics are necessary to "get the votes," will slowly but surely chip away at the legal protections contained in the California Coastal Act.
The Coastal Act was the product of a citizen initiative, as Californians from all over the state were inspired to collect signatures and then vote for the strongest coastal protection legislation in the nation.
Keep that inspiration coming!
And think about reading that pretty good speech!
Image Credit:
https://steveblank.com/2019/06/18/u-c-santa-cruz-commencement-speech-2019/