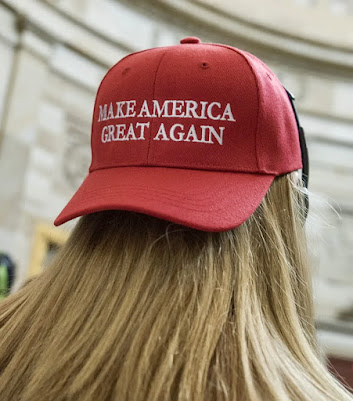 On Friday, January 7, 2022, The New York Times' editorial pages featured a main editorial statement by opinion writer Michelle Goldberg. Goldberg's column bore what I thought was a rather dire headline: "Are We Facing a Second Civil War?" Having asked the question, Goldberg's conclusion was that speculations about an incipient civil war, particularly as discussed in a book by Canadian novelist Stephen Marche, The Next Civil War: Dispatches From the American Future, need to be taken extremely seriously:

Most of Marche’s narratives seem more imaginable than a future in which Jan. 6 turns out to be the peak of right-wing insurrection, and America ends up basically OK. “It’s so easy to pretend it’s all going to work out,” he [Marche] writes. I don’t find it easy.

Times' columnist David Brooks had a column printed on the same page as Goldberg's column. Brooks' title was: "Democrats Are Bad at Defending Democracy." Brooks' column raised concerns that were related to what Goldberg said in her column, pointing out that the Democrats have not been focused on the real attack on voting rights and democracy. As Brooks sees it, Democrats have been preoccupied by events at the national level, when the problems, and the solutions, depend on reinvigorating democracy at the state and local level.
On the page facing Goldberg's editorial statement, Sohrab Ahmari, a contributing editor of The American Conservative, opined that "Trumpism Wasn't Radical Enough." His analysis was that "Trumpism" was a populist reaction to a corrupt and undemocratic national government, and that Trump's presidency had done nothing, really, actually to cure the problems. Implied in Ahmari's analysis was the thought that this failure, during the Trump years, might indeed play into some of the scenarios outlined in Marche's book, and that were given credit by Goldberg.
The Times' front page, on Friday, had three articles relating to events at the United States Capitol a year earlier, on January 6, 2021, which events, of course, have been seen, by some, as an "insurrection," or as an attempt at a "coup." Some have characterized what happened on January 6th, last year, as a "dress rehearsal" for a real insurrection, with that real insurrection (and civil war) still to come.
So, are we heading for "civil war," or not? That is the question raised by The Times in its January 7, 2022, edition - in both news articles and on its editorial pages. Overall, I'd have to say, The New York Times gives the impression that the paper agrees with Goldberg's analysis that some scenario that involves a species of civil war is "more imaginable" than the possibility that what happened on January 6th last year was "the peak of right-wing insurrection."*
It is my belief that people basically do what is expected of them. In her column, Goldberg cited to Fintan O'Toole, who wrote about Marche's book in The Atlantic. O'Toole warned that "prophecies of civil war can be self-fulfilling." I definitely think that O'Toole is right about that, which then makes it pretty important, unless one happens to think that a civil war would be an excellent idea, to find some alternative "prophecy" that we might get people to believe in.
I, personally, like the idea of a "prophecy" that calls for the empowerment of democratic self-government at the local and state level. In my opinion, Ahmari's analysis - coming from the "Trump" side of the political spectrum - is actually correct in saying that Trump's political success has come because Trump has been able to associate himself with a genuine and true complaint about our national government, and our current situation:

The “American carnage” Donald Trump railed against in his 2017 Inaugural Address was the product of specific policies and a specific mode of economic governance. The symptoms of the “carnage”: stagnant real wages; pervasive health and job insecurity; the disappearance into thin air of America’s industrial base; ruthless labor, tax and regulatory arbitrage by corporations, in the form of offshoring and open borders; the corollary decline in union power in the private economy; the ravages of fentanyl; and, at the level of cultural and ideological production, the rise of Big Tech, with its power to discipline not just what workers do and earn but also what they can say and think.

To reverse the carnage would have required reform and a sturdy willingness to govern. On those counts, the Trumpians came up short, beholden as they were to American populism’s irrepressible libertarian spirit.

I'm not much for civil war. I'm not much for killing people (in fact, I am 100% against that).
"Revolutions" are another matter. The answer to the outrages specified by Ahmari is not a civil war. It is a revolutionary transformation of our government, building from the bottom up, and rejecting what the "elites" want to defend - and I am including specifically the "elites" running the Democratic Party.
Ahmari's complaints about "American carnage" doesn't sound very much different from the complaints voiced  by presidential candidate Bernie Sanders in 2016 and 2020. I'd start from there.
Image Credit:
https://www.vox.com/the-goods/2019/2/25/18239952/maga-hat-ban-california-lawsuit-maddie-mueller
* The New York Times is not the only publication sounding the "Civil War" alarm. Click here for The New Yorker's take on the issue.
To Subscribe Just Click This Link