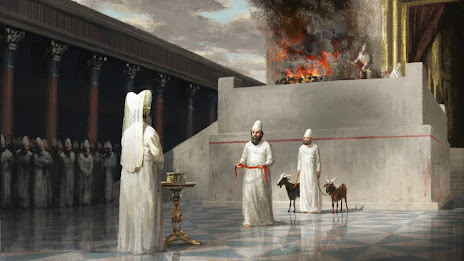 In the Sunday, September 12, 2021, edition of the New York Times, Isabel Kershner reports on a new "political thriller" which has "swept across cinema screens in Israel." The thriller in question is titled, "Legend of Destruction," and depicts 2,000 year old events that seem to prefigure current conditions in that country. Prime Minister Naftali Bennett is urging Israeli lawmakers to watch the film.
I am going to try to hunt down that film, myself, and suggest that others do so, too. The story told "opens in 66 A.D., with the Jewish multitudes prostrating themselves in the courtyards of the temple atoning for their sins on Yom Kippur. Four years later the temple lies in smoldering ruins."
As Kershner notes, the film's "pervading sense of apocalyptic doom speaks to the fears of Israelis at a moment when internal strife appears more threatening than outside enemies. Ideology has given way to identity politics and social schisms. The country is torn by religious-secular tensions; ethnic frictions between Jews and Arabs and Jews of Middle Eastern and European descent; and, in recent years, a growing chasm between the supporters and opponents of Mr. Netanyahu." Her review goes on to say the following:

Israeli leaders have increasingly drawn on the lessons from Jewish history, noting that the Jews enjoyed two previous periods of sovereignty in the land in ancient times, but both lasted only about 70 or 80 years — a poignant reminder for the modern state that, founded in 1948, has passed the 70-year mark.