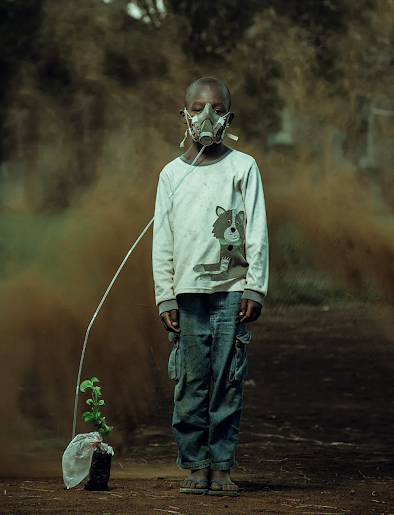 This picture is the message in today's blog posting!
____________________________________________
* In November, the winners of the Environmental Photographer of the Year 2021 were revealed. In the Climate Action category, a photo of a young boy attached surreally, via face mask and respirator, to a potted plant standing beside him like an oxygen tank, prevailed. A powerful meditation on the trajectory of environmental damage, "The Last Breath," by Kevin Ochieng Onyango, was photographed in Nairobi, Kenya. The image not only looks forward into our uncertain future but back into art history, absorbing and subverting influential works from the past. The fragility and preciousness of breath recalls themes that invigorate such works as Joseph Wright of Derby's 18th-Century masterpiece Experiment on a Bird in an Air Pump (informed by the recent discovery of oxygen by Joseph Priestley) and Italian artist Piero Manzoni's conceptual work from 1960, Artist's Breath, for which Manzoni attempted to preserve forever his breath in a red balloon. The friction between Manzoni's intention for the work ("When I blow up a balloon," he once insisted, "I am breathing my soul into an object that becomes eternal") and the eventual fate of his balloons – which have long since deflated and decomposed – speaks, however breathlessly, to the poignancy of Onyango's haunting image.
Image Credit:
https://www.bbc.com/culture/article/20211202-the-most-striking-images-of-2021
To Subscribe Just Click This Link