#32 / Lots Of Love For Martha Schwartz 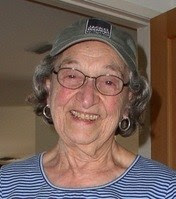 That is Martha Schwartz, pictured. Martha, who was 100 years old, died on January 5, 2022, and I read her obituary on Sunday, January 30th, which is when I learned of her death. I have reproduced the obituary below, and I am providing this link to a "Memory" page, so that any others who knew and loved Martha Schwartz might provide a little story about her, or post a picture, or otherwise help celebrate her wonderful life.
Martha's obituary says that Martha moved to Santa Cruz County with her husband, Sy (also a great person) in 1976. That was an important year in local politics. Phil Baldwin was elected to the Santa Cruz County Board of Supervisors, representing the First Supervisorial District, which includes Soquel, where Martha lived. In addition, Ed Borovatz, who had been appointed to the Board in 1975, won election in the Fifth Supervisorial District - representing the San Lorenzo Valley. Ed's opponent was an extreme development advocate, Pat Liberty, whose bicentennial-themed slogan, "Liberty in '76," didn't fool the voters. Phil's opponent, incumbent Dan Forbus, was another pro-development vote. That 1976 election made a big difference!
Ed, and Phil, and I ended up as a majority of three on our five-member Board, beginning in January 1977. We worked to expand community-based human services, and to prevent the runaway growth that was threatening to turn our North Coast and Pajaro Valley prime farmlands into sprawling subdivisions, and that put water supplies, forests, and landscapes at risk, throughout the entire county.
I am not absolutely positive that Martha was engaged in our local politics in 1976, the year she first appeared in Santa Cruz County - but I bet she was. By 1978, Martha was one of the most active and effective community volunteers engaged in local political action. That year, too, was an important year for local politics. Both Phil Baldwin and Ed Borovatz were recalled, replaced by pro-growth candidates; I was reelected to the Board (becoming a minority of one), and Measure J, our Growth Management referendum measure, was enacted by the voters.
I was active in Santa Cruz County politics, as an elected official, for twenty years, from 1975 to 1995. For almost that entire time, Martha Schwartz personally engaged with our local politics, to make a difference for the progressive economic, social, and environmental policies she so strongly supported.
This was a transformative period for our local community, and Martha Schwartz was a citizen leader during that whole time. I often say that we can't have an effective system of self-government unless we are willing to get involved ourselves. There is no better example of what that means than Martha Schwartz.
Martha's obituary says that Martha lived "a long, full life," and so she did. That life included her political activism, right here at the local level, which helped transform and sustain our local efforts on behalf of people and the environment. I am so grateful to have crossed paths, in my life, with Martha Schwartz!
A salute to Martha Schwartz! A salute to the citizen-based politics that is democracy's only hope!
oooOOOooo
Martha Schwartz
June 17, 1921- January 5, 2022
Santa Cruz, Ca
Martha Schwartz, 100, died at home surrounded by family on Wednesday, January 5, 2022. She lived a long, full life, and was healthy, strong and independent almost to the end. Martha was the beloved wife of the late Seymour Schwartz, mother of Renee (Gunnar Knutson) and Barbara Jackel (Stephen), grandmother of Noah (Patricia) and great grandmother of Rose and Lillian.
A hard core New Yorker (if you listened you could still hear traces of a New York accent), she and Seymour moved to Soquel in 1976 to leave the cold winters of New York and to be near their daughter Barbara. They participated in building their own house, where they had a large garden, beautiful views and an early solar energy installation. Martha continued to live there after Seymour's death in 1994 until she moved to Santa Cruz in 2006.
In the 1960s Martha and a partner opened an art gallery in Cold Spring Harbor, NY. It gave her great pleasure to share her love of art with anyone who walked into the gallery.
Martha was passionate about progressive causes, including the civil rights and anti-war movements of the 1960s and 70s, national elections and, after moving to the Santa Cruz area, local campaigns and causes. You could be pretty sure that if there was a demonstration she would be there.
Martha and Seymour took many Elderhostel trips, and returned with fascinating stories of their travels to England, Russia, Spain, Portugal, France, and China.
Martha was always young at heart, and she was rarely ill until her last year. She lived by herself until a few days before her death, and died at home. She did it her way.
There will not be a funeral service. Donations in her memory may be sent to ACLU Foundation of Northern California, attn: Development Department, 39 Drumm Street, San Francisco, CA 94111.
Image Credit:
https://www.legacy.com/us/obituaries/santacruzsentinel/name/martha-schwartz-obituary?id=32503959
To Subscribe Just Click This Link