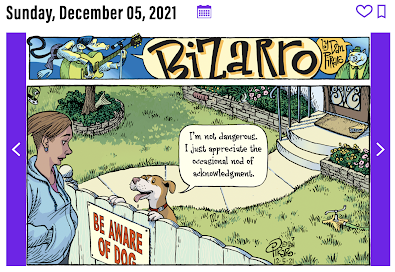 When I hunted down a cartoon I saw in the comics section of the newspaper on Sunday, December 5, 2021, and pushed the "Share" button I found online, I was greeted with the following message from Dan Piraro. The message was intended for the recipient of the link that appeared in a pre-written email, ready to be dispatched. The email said: "Check out this great comic I found on Comics Kingdom!"
My sentiments, exactly! Consider this blog posting an invitation to visit Comics Kingdom, and to check out this Bizarro comic in particular. The link that was in the pre-written email I have mentioned is the link you'll find in the last line of the first paragraph of this blog posting: SHARE!
oooOOOooo
I generally love all the Bizarro comics, but this one particularly touched me. Don't you agree with me that we often put up a "BEWARE" sign, hoping to insulate ourselves from others, thinking that suspicion and mistrust is the best way to prepare ourselves for the human encounters we will have with those whom we don't know? Isn't it true that our first instinct is often to protect ourselves from whatever unknown dangers may lurk in dealing with people whom we don't know, and whom we think might bite us?
I know I have that tendency. "BEWARE" of the person (whom you don't know). That's an easy default position. That keeps us safe - or so we tend to think.
Well, as Dan Piraro suggests in this comic, it may be that our safety will be most compromised not by attacks from those whom we don't know, but by our failure to "BE AWARE" of the potentialities of others, and to "Be Aware" of parts of the world with which we are unfamiliar.
Thank you, Dan Piraro! A good lesson from the Sunday comics:
BE AWARE!
Image Credit:
https://comicskingdom.com/shared_comics/c5ebc6a1-b535-4951-b056-bce4dd3f72ed
To Subscribe Just Click This Link