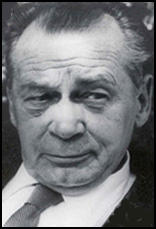 Heinrich Blücher, pictured, was a German poet and philosopher. He was also the second husband of Hannah Arendt.  Blücher taught, for a number of years, at Bard College, in upstate New York, which is now the home of the Hannah Arendt Center for Politics and Humanities.
I am an ongoing participant in the "Hannah Arendt Virtual Reading Group," sponsored by Bard and led by Roger Berkowitz, the Founder and Academic Director of the Hannah Arendt Center. If you think you might like to get involved with the VRG, which I certainly encourage, you can learn a little bit about the Virtual Reading Group by watching the short video, linked below.
The Virtual Reading Group meets almost every Friday, by way of a Zoom conference call, and because I do regularly participate, I sometimes hear a few bits and pieces about Blücher. Something I heard about Blücher on Friday, January 7, 2022, made an impression on me.
Apparently, during his time teaching at Bard, Blücher succeeded in convincing the college that it should not create or maintain a division of "Social Sciences," an academic appellation common at universities around the country, including at the University of California, Santa Cruz, where I teach. "Science" is the realm of inevitability and "proof." It is, essentially, the study of what I most often call the "World of Nature," and the scientific research done within the natural sciences is intended to uncover the "laws" that govern that world, and that define the way that world must operate.
As I like to tell my students, usually on the first day of class, "you can't disobey the law of gravity."
The "laws" that operate in the human world - the "political world" that we create ourselves - are not like the law of gravity, and are not like any of the laws that govern the World of Nature. I tell my students that, too! Laws in the natural world describe exactly how things must happen. Human laws, quite differently, can be (and often are) disobeyed. In the political world, in which we most immediately reside, "everything is possible." Our laws are not "descriptive" but "prescriptive." They tell us not what must happen, but what we have said we want to happen.
In our world, we can make both our dreams, and our nightmares, come true, and there is no "inevitability" either way.
Understanding these basic realities, which are themes that one can draw from the writings of Hannah Arendt, Blücher's appeal to the administrators and faculty members at Bard takes on a great significance. If we believe that the study of all things "social," our politics, our economy, psychology, and sociology, are studies that should be "scientific," then the assertion being made, whether recognized or not, is that human affairs should be thought of not as different from what happens in the World of Nature, but should be thought of in the same way. In fact, an assertion that there is something called "social science," is an assertion that, ultimately, human beings and what they do are subject to "laws" that determine what they must do.
There are no such "laws" in the human world, which is defined by freedom, not determined by some rule that compels a certain result.
At Bard, thanks to Blücher, what are elsewhere called the "social sciences" are called "social studies." It sounds kind of like a high school class, but Blücher's insight is profound.
We can study what we have done, what we usually do, what we are doing right now. But there is no "science" that can predict what we will do tomorrow, or in the very next instant.
Human beings - and that means all of us - have the inestimable gift of freedom, which means that we can do, now, or in the future, something never known or even imagined before.
Kudos to Heinrich Blücher, and to Hannah Arendt. They are buried together in the cemetery at Bard.
Their ideas are still very much alive! 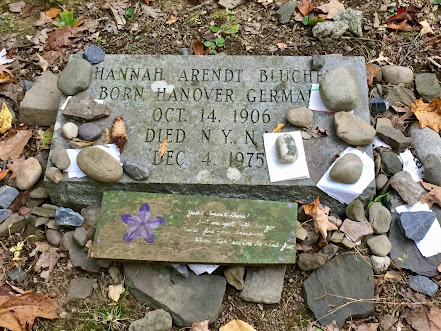