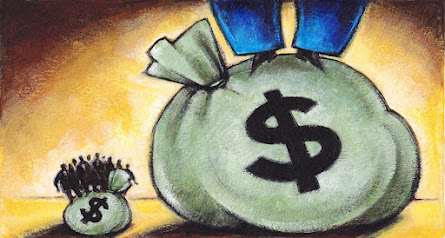 According to John O. McGinnis, writing in City Journal, the answer to the question posed in my headline is an exuberant "YES!" You can read his article by clicking this link. McGinnis' article is titled, "Why Democracy Needs The Rich."
I was able (without much difficulty) to find an article taking the contrary position. I am sure there are a lot of such articles, but this one is not from a magazine or journal typically associated with the political "left." It's an article published in The Harvard Gazette, titled, "The costs of inequality: Increasingly, it’s the rich and the rest."
The Harvard Gazette article, written by staff writer Christina Pazzanese, quotes former Supreme Court Justice Louis Brandeis as follows:

We can either have democracy in this country or we can have great wealth concentrated in the hands of a few, but we can’t have both.

I think former Justice Brandeis is right on target. Here, though, is what McGinnis has to say:

Evidence suggests that politicians ... follow the views of the wealthy on such matters as taxation, spending, and regulation: for example, the wealthy are less enthusiastic about raising the minimum wage than is the general population. But unequal influence—exerted through money spent on campaigns or political causes—does not necessarily mean undue influence. Perhaps the wealthy have more informed perspectives on certain issues than the average voter and push for policies that benefit not only themselves but others, too.

The U.S. is a representative democracy, not a direct democracy. The Framers expressly rejected the notion that the people should be able to instruct their representatives on how to vote. One proposed amendment to the Bill of Rights would have permitted voters to impose such binding directions, but James Madison objected: the nation’s representatives “must be able to contradict the sense of . . . the people” and not to vote for measures that they thought harmed the “public good,” he argued. Representatives will inevitably consider not just whether their policies align with the electorate’s current views but whether they will have good effects—at least, if they want to be reelected. Voters have short memories; they will hardly forgive politicians whose policies do harm just because those policies once earned high marks in opinion polls.

Public-choice theory—the application of economic principles to political decision-makers and institutions—reminds us that since individual voters are unlikely to change the result of an election, they will be naturally, and rationally, ignorant of most policies. They will often vote for expressive reasons—to affirm their image of themselves as good people. In times of crisis, voters may tend to pay more attention to the concrete consequences of their vote. But given that voting in ordinary times is mostly expressive, politicians should not uncritically obey popular sentiment but instead translate it into prudent policy ... History and logic indicate that a democracy in which the wealthy can exercise sway is likely a more stable and prosperous regime than one where the government attempts to redistribute influence from one group to another. (emphasis added).

I was struck by McGinnis' repetition of the often-made statement that the United States does not have a "direct democracy," but a "representative democracy." It has been my observation that political "conservatives" seem to think that this claim adequately disposes of complaints about the domination of our political process by the rich and powerful. Quite the opposite, in my opinion!
I think that there is nothing wrong, whatsoever, with a "representative" democracy. That's the kind of democracy I favor. The key, though, is that our elected officials must actually "represent" the people, if we are going to have that kind of democratic government. McGinnis doesn't think that "the people" - unless they're rich, of course - really know what is in their own best interests, or in the interests of the nation as a whole. The "rich" know that, because they know that a "prosperous regime" (meaning one that keeps them prosperous) is going to be the best thing not only for the rich, but for everyone.
True? Not really!
Here's a vision of our local riverside park, taken before the rains came in late December. It is substantially more bedraggled and inhospitable now: 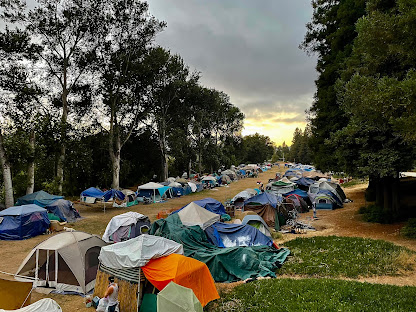 Any democracy worth having needs to serve the needs of all of us - that's what a "representative" democracy would actually do, and our current "democracy" isn't doing the job. It really does seem like Brandeis was right, and those public "policies" that McGinnis says are not really understood by the downtrodden poor, are the very same policies that have turned the nation into "the rich and the rest."
Does democracy need the rich?
Not really! But if all we "non-rich" folks don't make sure that our "representative democracy" actually does represent us, then the homeless camps will continue to proliferate, our educational system will continue to falter, and folks with mental health challenges will continue to be cast adrift without assistance. Etc.
But....The rich will get richer.
So, if we really believe in a "representative democracy" (and McGinnis seems to think that's a good thing), it's probably time for that "political revolution" that Bernie Sanders keeps talking about. It's about time that ordinary people start getting represented.
To Subscribe Just Click This Link
Image Credits:
(1) - https://news.harvard.edu/gazette/story/2016/02/the-costs-of-inequality-increasingly-its-the-rich-and-the-rest/
(2) - Gary A. Patton, personal photo