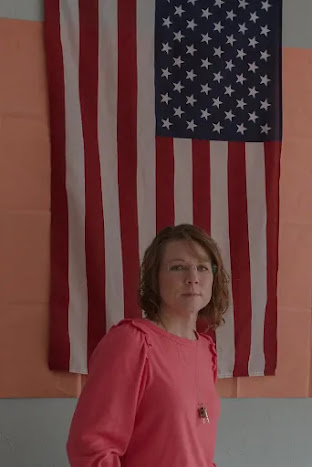 I was quite taken by an article in the December 26, 2021, edition of The New York Times. The article was titled, "A Fight About Masks Reveals a Deep Schism in the Soul of a City." I am giving you the hard copy version of the headline.
In the article, reporter Sabrina Tavernise described events in Enid, Oklahoma, after the Enid City Council agendized a proposed "Mask Mandate." As it turned out, what seemed like a responsible public health proposal (a proposal that would have been commonplace in Santa Cruz, California, where I live) generated an extreme reaction in Enid, Oklahoma.
Opponents showed up in great numbers at the Council Meeting at which the proposed ordinance was introduced - with the Council then rejecting the so-called "Mask Mandate" because of this opposition. After the Council set aside the proposed ordinance, the woman pictured above, Melissa Crabtree, proceeded to organize a new group, "Enid Freedom Fighters." This group tried to recall those Council Members who had been in favor of the mask mandate, and though the Enid Freedom Fighters were not successful in that recall effort, the group went on at the next regular election to take over the Council, fundamentally shifting the politics of the community.
Jonathan Waddell, a City Council Member who had lived in Enid with his family for seven years, and who had voted in favor of the mask mandate, was defeated at that next election, and he is now looking for work elsewhere. Enid doesn't seem like home, anymore, he says.
But here is what struck me about the article. Waddell (unlike a presidential candidate I remember) did not say that those who ignored public health concerns, and who defeated the mask mandate in Enid, were a bunch of "deplorables."

Of the City Council election, he [Waddell] said: “I think the process worked. You elect representatives that reflect your ideals. And these folks do. They reflect the ideals of Enid. And I’m OK with that.”

The Times' article, like its headline, alluding to a "deep schism" in "the soul" of the city, plays up the connection of the Enid Freedom Fighters to Evangelical Christianity, former president Trump, and other right-wing issues. These are not ideas I agree with, but I do agree with what Jonathan Waddell said about the political process.
Opinions and values differ. No one should ever presume that their opinions or values are entitled to allegiance or deference, just because they are "right." In a society dedicated to democratic self-government, those who care the most, and who get involved because they do care, will win elections, and will govern accordingly.
As former Council Member Waddell says, "I'm OK with that."
Image Credit:
https://www.nytimes.com/2021/12/26/us/oklahoma-masks.html
To Subscribe Just Click This Link