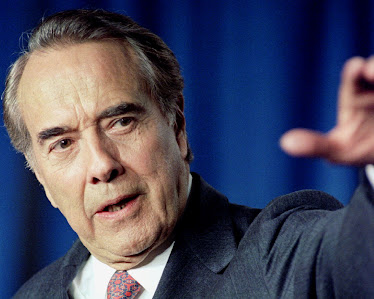 George Skelton is a Los Angeles Times' columnist. On December 14, 2021, Skelton wrote a column about  Bob Dole, who died on December 5th. Dole, who is pictured above, represented Kansas in the United States Senate from 1969 to 1996, and he was the Republican Leader of the Senate during the final eleven years of his tenure, including three non-consecutive years as Senate Majority Leader. Dole ran for president three times, but is most noted for his service in the Senate.
The headline on Skelton's column claimed that Dole's "gift for compromise won him [the] nation's respect." Disappointingly, as far as I was concerned, the column itself didn't talk about the subject of compromise at all, or give any examples of how Dole had compromised during his long political career - and why that record of compromise was so positively received.
I would have liked to have seen a discussion of Dole's "gift for compromise." During the twenty years I served on the Santa Cruz County Board of Supervisors, I had a lot of opportunity to think about political compromise, and I ended up with a very specific idea about how "compromise" should fit in to political decision-making. I assumed, from the headline, that Skelton was going to suggest that political compromise is a positive good, and would talk about why treating compromise as a goal  - as evidenced, I assumed, by Bob Dole's career - is the kind of political behavior that "wins the nation's respect."
I wanted to see that discussion because my own thoughts about compromise run in a different direction. While I know that many people want their politicians to aim for compromise as a "goal," and think of compromise as a positive good, and as a way to bring people together, I have concluded that this is exactly the wrong way to think about political compromise.
The way I see it, our democratically-elected decision-making bodies (from a five-person Board of Supervisors to the United States Congress) are supposed to be making decisions that represent what "we," the people, want. That is the purpose of our system of "representative" government, and so we need to think about compromise in light of its ability either to advance that goal, or to retard it.
In order to analyze how "compromise" fits into our system, let's begin with the selection of the representatives we send into government. It is impractical for everyone to vote on everything, which is why we do have a "representative" democracy, and it is through elections that "we," the voters at large, pick our representatives. Elections are how we pick the people who are going to make decisions on our behalf.
As elections are held in which we get to choose our representatives, we focus, legitimately, on the personal capacities and qualities of the candidates. Usually, a voter would want to pick a representative who is "smart," i.e., who can figure out what's going on. Presumably, voters would also like to select a representative who is "hard working." Honesty might be another thing to consider! There are various individual capacities and qualities that are desirable. Thinking about those is one way we make up our mind about who to vote for to represent us.
But the personal qualities and capacities of the candidates are not the only thing we care about. We care about the issues! We want to know what the candidates "stand for," how they will vote on the key issues we care about. On the national level, does a candidate support or oppose a woman's "right to choose?" On the local level, does a candidate support, or oppose, pushing high-rise residential structures into existing low-rise neighborhoods? These are the kind of "issues" we care about (there are lots of different issues, of course), and my bet is that an awful lot of voters vote for a candidate, first and foremost, who is committed to the kind of policy positions the voter supports. That is how our system of representative democracy is supposed to work.
If we are going to have a functioning "representative" government, then an elected "representative" should actually represent the voters who put the representative in place. The elected representative, once in office, should actually work to accomplish, and vote to accomplish, what the majority who elected that representative wants to achieve.
The basic purpose of our representative government, in other words, is to make choices on important issues. This is my understanding of the whole purpose of government, and if that is right, then an elected representative who was placed in office to try to achieve a particular set of goals, should do everything possible actually to achieve them. "Compromise" is not the goal. Achieving what you campaigned to do is the goal.
This seems pretty obvious, to me, but it is surprising how many elected officials, once elected, think of themselves as "judges," weighing arguments presented before them, or who think that their assignment is to try to "bring everyone together," by trying to get everyone to agree on something (that everyone can agree on).
That approach to government, I am convinced, ultimately convinces everyone - all the voters - that the government isn't worth very much. People stop their involvement - and don't even vote - because they don't think it will make any difference. When compromise is the "goal," as opposed to something that happens when you can't achieve what you campaigned on, and to which you continue to be dedicated, then why should anyone care? Yesterday, I reported on what a city council member said, after losing his bid for reelection in Enid, Oklahoma:

I think the process worked. You elect representatives that reflect your ideals. And these folks do. They reflect the ideals of Enid. And I’m OK with that.

Jonathan Waddell lost, and the person who beat him didn't try to "compromise." Waddell didn't think the person who beat him should compromise, either. As long as we have a governmental system that provides results, that moves ahead on important issues - based on which side "wins" - then our representative government is operating the way it is supposed to operate. If we turn our system of representative government into a system in which those elected don't work to achieve what they said they would try to achieve, but think compromise is the "goal," that won't make people "respect" the government.
It will have exactly the opposite effect!
Image Credit:
https://www.washingtonpost.com/opinions/2021/12/06/bob-dole-op-ed-what-america-needs/
To Subscribe Just Click This Link