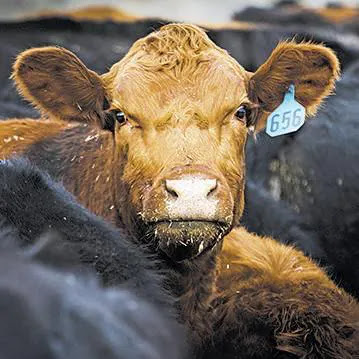 The New York Times ran an article in late December with the following title: "Boom in Beef, But Ranchers Can't Cash In." The link just provided may allow even non-subscribers to read the article, though I give no guarantees. The Times' own website has the article, by Peter S. Goodman, right here.
The Times' article describes, specifically, the plight of Steve Charter, a third-generation cattle rancher, who is sixty-nine years old. Charter is "accustomed to working seven days a week, 365 days a year - in winter temperatures descending to minus 40, and in summer swelter reaching 110 degrees." He is described as "choking back tears" as he tells The Times' reporter that he is on the brink of getting out of the cattle business. "With no profits in five years, he is pondering the fate that has befallen more than half a million other American ranchers in recent decades: selling off his herd."
What is the problem?

Since the 1980s, the four largest meatpackers have used a wave of mergers to increase their share of the market from 36 percent to 85 percent, according to the U.S. Department of Agriculture.

Their dominance has allowed them to extinguish competition and dictate prices, exploiting how federal authorities have weakened the enforcement of laws enacted a century ago to tame the excesses of the Robber Barons, say antitrust experts and advocates for the ranchers (emphasis added).

The idea that "the market" produces "equity" is only theoretically so. The rules that govern the market tell everyone that what counts most is money. Those with the gold do "make the rules," as that "Golden Rule of Capitalism" suggests. Antitrust laws and governmental regulations have been subverted, because there is a "Golden Rule" of politics, too. Money decides!
Given the fact that our regulatory efforts to protect independent producers like Steve Charter have not, clearly, actually protected them - and understanding that the same thing has happened to working men and women, who have not had a raise for decades, while the corporations and the businesses that employ them have been phenomenally profitable - something new seems called for.
My suggestion? We need to get operationally serious about the insight that everyone involved in producing and delivering the goods we consume plays a vital role in the overall economic success of our economy. It is time, in other words, to collapse the distinction between the "owners" and the "workers." Not only do we need vigorous antitrust enforcement, to break up corporate concentration, we need to require that all large corporations be cooperatively owned. In other words, if you work for Ford, or General Motors, or Facebook, or Tyson Foods, you must have an ownership stake in the enterprise. The enterprise must actually be owned by those who do the work.
Hows that for a rule? Well, it's going to take a popular political uprising to make that happen. Bernie Sanders calls it "Our Revolution."
Image Credit:
https://blendle.com/i/the-new-york-times/boom-in-beef-but-ranchers-cant-cash-in/bnl-newyorktimes-20211227-1_6
To Subscribe Just Click This Link