#10 / MLK And President Biden Are Backing Me Up 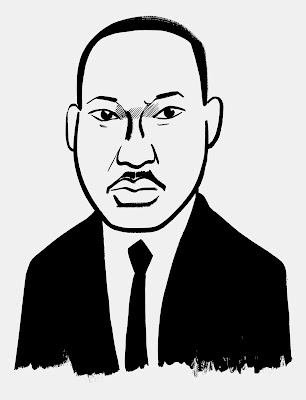 Yesterday, I wrote a blog post that claimed that "in our world, we can make both our dreams, and our nightmares, come true, and there is no 'inevitability' either way."
Having posted that assertion (actually an assertion that is familiar to anyone who reads this blog on any regular basis), I was delighted to see a short little piece in The New Yorker, also datelined January 9, 2022, that backed me up.
Jelani Cobb's article was titled, "Martin Luther King, Jr.,’s History Lessons." The article reported on a speech given by Martin Luther King, Jr. on March 25, 1965, at the conclusion of what Cobb correctly called "the brutally consequential march from Selma to Montgomery." King's speech was titled, “Our God Is Marching On!” It was not, Cobb said, among King's best-known speeches, but was one of his "most revelatory," and one of his most optimistic, drawing on events in American history to evoke the possibilities of positive change. As Cobb tells us about the speech, King "spoke to a crowd of twenty-five thousand people on the grounds of the Alabama state capitol, in view of the office window of the segregationist governor George Wallace, and argued that, in the decade since the bus boycotts in that city, a new movement had emerged and an older order was starting to fall away."
Cobb associated King's "history lessons" with the speech given by President Biden in Statuary Hall, in the United States Capitol building, on January 6th of this year. Look for how the President ends that speech, as Cobb quotes him, making clear that Martin Luther King Jr. had exactly the same view:

This holiday honoring Martin Luther King, Jr., sees a nation embroiled in conflicts that would have looked numbingly familiar to him. As school curricula and online discourse threaten to narrow our understanding of both past and future, it’s more important than ever to take stock of our history and its consequences, as King did in his speech more than half a century ago. In Montgomery, the civil-rights leader spoke of the intransigent optimism that had led activists to fight for change, in the face of skepticism about what could actually be achieved. President Biden struck a similar note in his Statuary Hall speech. For those who believe in democracy, he said, “anything is possible—anything.” This is true, as the events of both March 25, 1965, and January 6, 2021, established. Anything is possible right now, and that is as much cause for hope as it is for grave concern (emphasis added).

"Anything" is possible. Our history will reflect what we choose to do - now, in this present moment - and we will make either our dreams, or our nightmares come true, depending on the choices that we make, and the actions that we take.
That is, of course, a cause for grave concern.
And for great hope, too.
To Subscribe Just Click This Link
Image Credit:
https://www.newyorker.com/magazine/2022/01/17/martin-luther-king-jrs-history-lessons