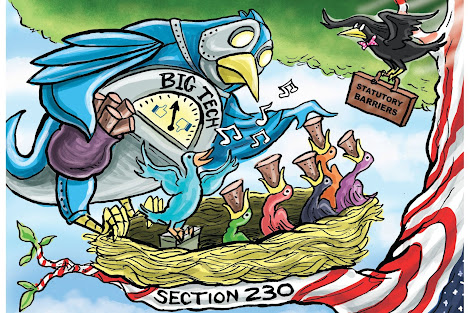 It would be good for people to start learning about Section 230 of The Communications Decency Act, since the operations of Section 230 are now widely recognized as having major political and free speech impacts.
Section 230 [47 U.S.C. § 230] provides as follows:

No provider or user of an interactive computer service shall be treated as the publisher or speaker of any information provided by another information content provider.

In the internet posting linked above, the Electronic Frontier Foundation makes the following case for Section 230:

[Section 230] has allowed for YouTube and Vimeo users to upload their own videos, Amazon and Yelp to offer countless user reviews, craigslist to host classified ads, and Facebook and Twitter to offer social networking to hundreds of millions of Internet users. Given the sheer size of user-generated websites (for example, Facebook alone has more than 1 billion users, and YouTube users upload 100 hours of video every minute), it would be infeasible for online intermediaries to prevent objectionable content from cropping up on their site. Rather than face potential liability for their users' actions, most would likely not host any user content at all or would need to protect themselves by being actively engaged in censoring what we say, what we see, and what we do online. In short, CDA 230 is perhaps the most influential law to protect the kind of innovation that has allowed the Internet to thrive since 1996.

That sounds pretty good to me; it's good to insulate internet platforms from liability for what they publish, as a way to promote free speech and debate. There are, however, some other perspectives worth noting.
In The Wall Street Journal's July 31-August 1, 2021 edition, an Op-Ed by Phillip Hamburger and Clare Morell raised some significant concerns. In the hard copy version, their piece was titled, "On Censorship, Big Tech Has It Both Ways." The Op-Ed makes the case that "Big Tech" is both having its cake, and eating it, too, where internet censorship is concerned:

Does the Constitution require Americans to accept Big Tech censorship? The claim is counterintuitive but the logic is clear: If you submit a letter to this newspaper, the editors have no legal obligation to publish it, and a statute requiring them to do so would be struck down as a violation of the Journal’s First Amendment rights. Facebook and Twitter, the argument goes, have the same right not to provide a platform to views they find objectionable.

Hamburger and Morell, in other words, are making the claim that while the Electronic Frontier Foundation may be correct in its argument that free speech is advanced by insulating internet platforms, like Facebook, from liability for publishing the views of any of those billion or so "Facebook Friends" who regularly sound off on topics from child pornography to "Making America Great Again," that isn't the end of the story. It is also true that internet platforms don't publish everything that those "Facebook Friends" may post - and they don't have to. Facebook picks and chooses what it publishes, and thus, like the "Big Tech Big Bird," in the cartoon above, internet platforms engage in "viewpoint discrimination." The platforms put a cork in the mouth of some commenters, and let other commenters sing.
The situation is actually even more complicated, because Facebook and other internet platforms, we now realize, employ "algorithms" that determine, in fact, what their users will see. Even if a comment, or a video, or some form of expression is actually "published" on the platform, the relevant algorithms (under control of the platforms themselves) may effectively prevent its wide dissemination. The comment may be made, and may be published on the platform, but virtually nobody hears or sees it - and it is these giant internet companies that make the call. They are, effectively, acting as censors. Hamburger and Morell don't think they should get away with that.
To make the argument crystal clear, let's use an example. Facebook will "take down," and remove from its platform, a statement that asserts that Covid-19 vaccination shots contain microchips that lodge in a person's brain, and that make them susceptible to direct government control. That's not true, says Facebook - and Facebook is right about that - so Facebook won't let anyone make that claim. If some Facebook users do make that claim - and boy, do they! - Facebook will remove such posts as soon as those posts come to its attention, and Facebook may even ban the user from the platform, temporarily or permanently. Our former president, Donald Trump, is currently sitting out such a ban.
With respect to potentially harmful and obviously untrue statements, like the one in the example, it is difficult to argue that internet platforms should be required to publish such statements. However, let's remember Pontius Pilate, and that always pertinent question, "What is truth?"
If Facebook and other internet platforms are going to assert the right to determine what is true, and what isn't, and to publish only those statements that Facebook and other internet platforms believe are "true," where is that "competition of ideas in the marketplace of public opinion" going to come from, now that we live, most immediately, in an online, wired world? In what forum will we be able to have a debate about the "truth," so that we can each get assistance in our efforts to uncover what "truth" really is?
Congress has not yet come up with a Section 230 rewrite, to deal with the complicated issues involved in protecting free speech and expression on the internet, while avoiding problems identified in that Wall Street Journal Op-Ed.
The Electronic Frontier Foundation sees the internet as something like an online Hyde Park, open to the public, and a great arena for free speech and debate, but it isn't quite that simple. In fact, access to the internet, as an electronic "garden," can be obtained only through gates that are maintained by giant corporations that are definitely not immune from temptations to use their gatekeeper functions to suppress the speech they don't like, and to promote the speech they do.
The answer? Is there one? To be continued, I feel certain!
__________________________________________________
Image Credit:
https://www.wsj.com/articles/big-tech-twitter-facebook-google-youtube-sec-230-common-carrier-11627656722
To Subscribe Just Click This Link