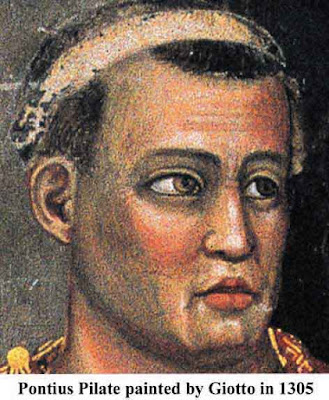 Pontius Pilate is the guy who asked Jesus, "What is truth?" That was just before Pilate, a Roman Governor, washed his hands, to demonstrate that Pilate took no personal responsibility for the actions he was just about to take. Then, Pilate sent Jesus out to be crucified.

In a particularly insightful article, published by TruthDig in January, 2019, philosophy professor Rebecca Gordon discusses the place of truth in politics. She uses Pilate's dialogue with Jesus as a place to begin the discussion:

What, indeed, is truth? As Pilate implies and John’s tale suggests, it seems to depend on who’s telling the story — and whose story we choose to believe. Could truth, in other words, just be a matter of opinion?

It isn't long before Gordon is talking about George W. Bush and Donald J. Trump. She doesn't mention Roger Ailes, the former CEO of Fox News, though she might have. While it may be that he never said it, Ailes is credited with the observation that "the truth is whatever people will believe." That approach to the truth is characteristic of contemporary political discourse, and Gordon addresses that approach to truth by referencing Hannah Arendt. Arendt noted that totalitarianism grows in any environment in which the people come to believe that "everything is possible and that nothing is true."

It seems to me that we have just about gotten there, in this country, and that this is a big problem. Of course, this is the main point of Gordon's article. If we want to stop our slide into an ever more authoritarian politics, in which power is the only reliable point of reference, then we need not only to insist that others tell us the truth, and that telling the truth matters; we must tell the truth ourselves.

In almost every case, the "truth" about things is not easily discerned, which means that when we "tell the truth" about something "political," we need to acknowledge the limits of our knowledge and concede that there may well be something to be said for the "other side" of the question. "Concession" is an important part of telling a truth that will be accepted as such. Calling someone a "liar," our president included, is not the best way to convince someone that the truth is on our side.

My takeaway from the Gordon article, which I really do recommend, is that we all need to make sure that our own participation in politics doesn't enable others to decide that "everything is possible and that nothing is true."