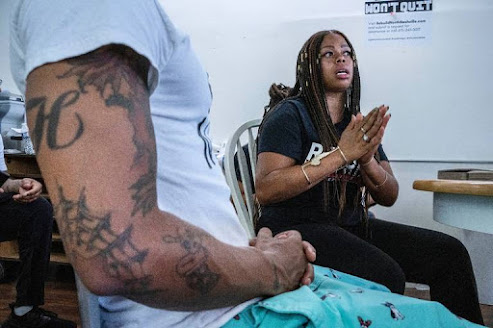 Anywhere there’s a significant level of crime there are also homegrown peacemakers.

Read more here: https://www.miamiherald.com/news/article253336328.html#storylink=cpy
An Associated Press story out of Nashville, Tennessee caught my attention on Sunday, August 8, 2021. I found the story in that day's edition of the San Jose Mercury News. I was delighted to learn that there are grassroots efforts, throughout the nation, to combat community violence:

Smaller, grassroots efforts in communities across the country are trying alternative strategies to curb violence, recognizing the fallout from decades of “tough on crime” policies that criminalized a generation, leaving them with fewer resources and opportunities than ever.

That includes violence interrupter programs such as Gideon’s Army or Cure Violence Global, which started in Chicago and has branched out to other cites. Other groups, including the West Nashville Dream Center, primarily attack structural issues such as poverty and educational inequality. The groups differ in philosophy but share a common goal of improving life in their communities.
Read more here: https://www.miamiherald.com/news/article253336328.html#storylink=cpy

Our salvation as a nation (and this is one of those "revelations" that Jad Abumrad talks about in one of my previous blog postings with a Tennessee connection) will come from small, local, volunteer, grassroots groups, mobilized to deal with problems that seem impossible to deal with at a larger scale.
Think that can't work? As one of our most impressive thinkers has told us, "it's the only thing that ever has."
__________________________________________________
Image Credit:
https://www.miamiherald.com/news/article253336328.html
To Subscribe Just Click This Link