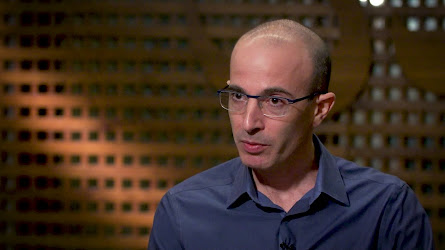 That is Yuval Noah Harari pictured above. He is described in Wikipedia as an "Israeli public intellectual." Harari's book, Sapiens, is another one of those books that I think I should have read, but that I haven't read yet. Sapiens is subtitled, "A Brief History of Humankind."
Luckily, I have been able to get the gist of what Harari has written about in Sapiens (and in a couple of his follow on books) by reading a quick little interview with Harari, in The New York Times Magazine. That interview, with The Times' David Marchese, has the following title, online: "Yuval Noah Harari Believes This Simple Story Can Save the Planet." Here is a brief excerpt:

With the publication in the United States of his best-selling “Sapiens” in 2015, the Israeli historian and philosopher Yuval Noah Harari arrived at the top rank of public intellectuals, a position he consolidated with “Homo Deus” (2017) and “21 Lessons for the 21st Century” (2018). Harari’s key theme is the idea that human society has largely been driven by our species’s capacity to believe in what he calls fictions: those things whose power is derived from their existence in our collective imaginations, whether they be gods or nations; our belief in them allows us to cooperate on a societal scale....

Previously philosophy was a kind of luxury: You can indulge in it or not. Now you really need to answer crucial philosophical questions about what humanity is or the nature of the good in order to decide what to do with, for example, new biotechnologies. So maybe I’ve reached people because I’ve come from the perspective of history and philosophy and not biology or economics. Also, my most central idea is simple. It’s the primacy of fictions, that to understand the world you need to take stories seriously. The story in which you believe shapes the society that you create (emphasis added).

Another article in the same edition of The New York Times Magazine, "A Nation Of Argument," highlights the difficulty Americans seem to be having, right now, as they think about American history and our own American "story." Division and disunity abound. As yesterday's blog posting makes clear, there is a lot of focus on the differences that divide us. Unifying and uplifting themes don't seem to be very compelling as we contemplate what the United States is all about. Is the story in which we believe one of inevitable conflict, or is there a common purpose out there, somewhere?
Abraham Lincoln, who is certainly a central character in American history, and one who has long been looked to as the American who has best explained "our story" to the American people, made clear that "a house divided against itself cannot stand."
It was Lincoln who said, as the nation neared the end of a bitter civil war, that it was time to "bind up the nation's wounds," a time to come together to "do all which may achieve and cherish a just and lasting peace among ourselves and with all nations." The whole purpose of our civil war, as Lincoln put it, was to ensure that a government "of the people, by the people, for the people, shall not perish from the earth."
Charles Blow, in a column published in yesterday's edition of The New York Times, suggests that we are now, once again ""edging closer to civil war."
Let us not go there. I am unwilling to go there.
Instead, I am looking to Lincoln to help me - and to help all of us - find the "story in which we believe." Emphasis on the "we." There is such a story - I am certain of it - and Abraham Lincoln can show us the way. 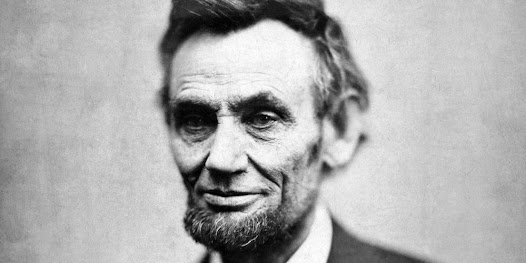