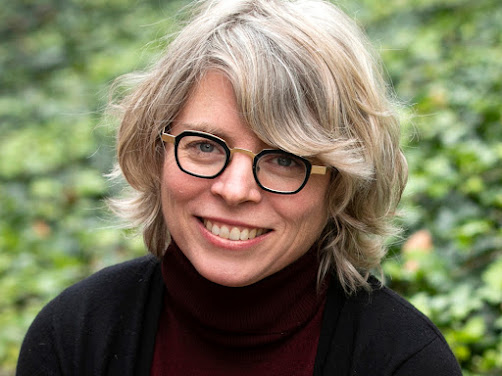 No, that is not Elon Musk, pictured above. But I suspect you knew that. Pictured above is Jill Lepore. Lepore is a professor of history at Harvard, and writes for The New Yorker, and is definitely my favorite historian of the present day. Lepore has written about Musk, which is why her picture graces this blog posting. Her article, published in The New York Times on November 7, 2021, is titled, "Elon Musk Is Building a Sci-Fi World, and the Rest of Us Are Trapped in It." It's worth reading.
Here's how Lepore starts off (and then keeps going):

The last week of October, Bill Gates (net worth: $138 billion) celebrated his 66th birthday in a cove off the coast of Turkey, ferrying guests from his rented yacht to a beach resort by private helicopter. Guests, according to local reports, included Jeff Bezos (net worth: $197 billion), who after the party flew back to his own yacht, not to be confused with the “superyacht” he is building at a cost of more than $500 million.

The world’s richest person, Elon Musk (net worth: $317 billion), did not attend. He was most likely in Texas, where his company SpaceX was preparing for a rocket launch. Mark Zuckerberg (net worth: $119 billion) wasn’t there, either, but the day after Mr. Gates’s party, he [Zuckerberg] announced his plan for the metaverse, a virtual reality where, wearing a headset and gear that closes out the actual world, you can spend your day as an avatar doing things like going to parties on remote Aegean islands or boarding a yacht or flying in a rocket, as if you were obscenely rich.

The metaverse is at once an illustration of and a distraction from a broader and more troubling turn in the history of capitalism. The world’s techno-billionaires are forging a new kind of capitalism: Muskism. Mr. Musk, who likes to troll his rivals, mocked Mr. Zuckerberg’s metaverse. But from missions to Mars and the moon to the metaverse, it’s all Muskism: extreme, extraterrestrial capitalism, where stock prices are driven less by earnings than by fantasies from science fiction.

Metaverse, the term, comes from a 1992 science fiction novel by Neal Stephenson, but the idea is much older. There’s a version of it, the holodeck, in the “Star Trek” franchise, which Mr. Bezos was obsessed with as a kid; last month, he sent William Shatner, the actor who played Captain Kirk in the original series, into space. Billionaires, having read stories of world-building as boys, are now rich enough, as men, to build worlds. The rest of us are trapped in them....

Muskism has origins in Silicon Valley of the 1990s, when Mr. Musk dropped out of a Ph.D. program at Stanford to start his first company and then his second, X.com. As the gap between the rich and the poor grew wider and wider, the claims of Silicon Valley start-ups became more and more grandiose. Google opened an R&D division called X, whose aim is “to solve some of the world’s hardest problems.”

Tech companies started talking about their mission, and their mission was always magnificently inflated: transforming the future of work, connecting all of humanity, making the world a better place, saving the entire planet. Muskism is a capitalism in which companies worry — very publicly, and quite feverishly — about all manner of world-ending disasters, about the all-too-real catastrophe of climate change, but more often about mysterious “existential risks,” or x-risks, including the extinction of humanity, from which only techno-billionaires, apparently, can save us....

Ursula K. Le Guin once wrote an essay, a riff on an essay by Virginia Woolf, about how the subject of all novels is the ordinary, humble, flawed human being. Woolf called her “Mrs. Brown.” Le Guin thought midcentury science fiction — of the sort written by Isaac Asimov and Robert Heinlein, two more writers lavishly admired by Mr. Musk and Mr. Bezos — had lost track of Mrs. Brown. This version of science fiction, she worried, seemed to be “trapped for good inside our great, gleaming spaceships, hurtling out across the galaxy,” ships she described as “capable of containing heroic captains in black and silver uniforms” and “capable of blasting other, inimical ships into smithereens with their apocalyptic, holocaustic rayguns, and of bringing loads of colonists from Earth to unknown worlds,” and finally “ships capable of anything, absolutely anything, except one thing: they cannot contain Mrs. Brown.”

The future envisioned by Muskism and the metaverse — the real and virtual worlds being built by techno-billionaires — doesn’t contain Mrs. Brown, either. Misreading both history and fiction, it can’t even imagine her. I think someone maybe ought to make a sticker. It could read, “EXIT THE METAVERSE.”

The point that Lepore is making is that, interestingly enough, Musk, Bezos, and Zuckerberg - billionaires all - are all hoping to live in what is actually a fantasy world. To be more accurate, I guess I should say a "science fiction world," realizing, as I do, that the partisans of the two genres definitely think that "science fiction" and "fantasy" are different from each other.
Whatever!
Money, these billionaires seem to think, can do anything. Bezos is aiming to start a new colony on the moon. Musk is shooting to do the same thing on Mars. Zuckerberg is trying to escape to a new world in a cyber-reality accessed through the headsets that his newly-renamed company will supply (at a pretty price, of course).
This "Mrs. Brown" person is you and me, the non-billionaires who are living ordinary lives here on Planet Earth. What we know (and what Lepore is reminding us, just in case it might have slipped our mind) is that the world of our human creation here on Earth is the immediate reality in which we actually live, and in which we must live, since there is not, actually, any alternative reality that is truly real. "Muskism" is without any genuine substance.
Money makes a person think that the person with the money is God. The "I am God" temptation is a temptation we all have, but money amplifies the delusion. Mrs. Brown is here to remind us that we're not God, and that what is going on in that "real" world that we actually inhabit is in desperate need of our attention.
The billionaires aren't helping.
__________________________________________________
Image Credit:
https://www.smith.edu/news/jill-lepore-pres-col-2021
To Subscribe Just Click This Link