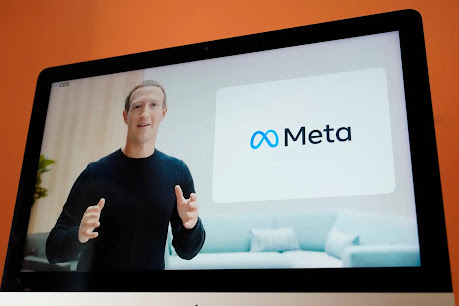 That Mark Zuckerberg is restructuring his company, Facebook, as part of an effort to get "beyond" the place in which he and the company currently find themselves, is old news by now. The image above was gleaned from an article in the October 29, 2021, edition of The New York Times. If you have the credentials to slip past The Times' paywall, you can read the entire article by clicking the following link. The article is titled, "The Metaverse Is Mark Zuckerberg’s Escape Hatch."
"Meta" is defined as meaning "situated behind or beyond," and Zuckerberg defines his "Metaverse" as "a clean, well-lit virtual world, entered with virtual and augmented reality hardware at first and more advanced body sensors later on, in which people can play virtual games, attend virtual concerts, go shopping for virtual goods, collect virtual art, hang out with each others’ virtual avatars and attend virtual work meetings."
Whether Zuckerberg's reconfiguration of Facebook's corporate structure will fend off further efforts to hold Zuckerberg and Facebook accountable for the business decisions that Zuckerberg and Facebook have made is yet to be determined. The so-called "Facebook Papers," the internal corporate documents made public by Frances Haugen, raise a lot of questions. Time will tell whether renaming the company will make critics, including Members of Congress and other official types, disappear. I tend to think it probably won't.
The question I would like to raise here, however, is a different one. I want to question whether Zuckerberg's "Metaverse" is going to be a space that people will actually want to inhabit. One blogger, whose blog is titled, "We Live In The Natural World," has already decided that he wants no part of it. As he says, "If the future of the real world, the natural world, is to be replaced by this proposed faux, digital, 3D simulacrum of life, I’m glad I won’t live long enough to see its arrival."
At any rate, I would like us to think about what this "Metaverse" really implies.
I am fond of touting my "Two Worlds Hypothesis," which suggests that we can learn important lessons by understanding "the world" as really being "two worlds," the World of Nature, a world that preexists our own appearance on the scene, and the "Human World," which is the world that we (human beings) have constructed within the World of Nature. We live most "immediately" in the Human World, but "ultimately," we live in and depend upon the World of Nature - just as that "We Live In The Natural World" blog says. How then, does the "Metaverse" fit into this way of understanding our human situation?
The "Metaverse" is clearly part of the "Human World," because it is a human creation. However, most of the "Human World" is actually tightly integrated with the World of Nature. That is one reason that some people resist the idea that we should conceptualize our existence as being placed in "two worlds." After all, our homes are built out of materials found in Nature. If we walk on city streets, or country roads, we will hear, smell, and see that "World of Nature" upon which everything ultimately depends. Not so in the "Metaverse."
The "Metaverse," sometimes called "Augmented Reality," is completely synthetic and artificial. It is the opposite of "reality." While we are wearing the goggles, or while we look through the AR glasses that provide an entry into the "Metaverse," everything we see is a simulacrum of the "reality" that is that combination of Nature and human effort that constitutes the world in which we most immediately live. The "Metaverse" is a next step towards a world in which Nature has no place at all. One tip off is that his "Metaverse" is going to be "clean and well-lit." The dirty secrets and dark corners of the human-nature amalgam that constitutes our current reality are eliminated. The "Metaverse" is - not only for Zuckerberg, but for everyone who is willing to follow him there - a kind of "escape hatch."
I would like to suggest that trying to escape our current reality (a composite reality, in the way I see it) is not a good thing. The promises of the "Metaverse" are built on the idea that we can truly escape the World of Nature, the world of constraints, the world of dark corners and dirty secrets, that are the ultimate reality that we may try to avoid confronting, but which world, in fact, is our true home.
Trying to "escape" the world we have, with all its problems and difficulties, is the very most certain way to insure that we will have more of both.
__________________________________________________
Image Credit:
https://www.nytimes.com/2021/10/29/technology/meta-facebook-zuckerberg.html
To Subscribe Just Click This Link