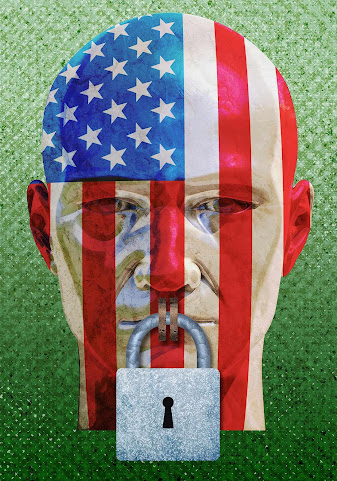 The "State Secrets Doctrine," also known as the "State Secrets Privilege," has been in the news, recently, thanks to the fact that oral arguments have just taken place in a Supreme Court case that has brought this judicially-created doctrine to the fore. On October 13, 2021, Andrew P. Napolitano, a former judge of the Superior Court of New Jersey, and someone we might call a "conservative," since Napolitano serves as an analyst for the Fox News Channel, wrote a piece for The Washington Times that denounced the state secrets privilege. Napolitano's opinion piece is titled, "U.S. state secrets doctrine is a fraud." Napolitano has written a number of books on the U.S. Constitution, and he really doesn't have one nice thing to say about the state secrets doctrine.
Adam Liptak, the Supreme Court correspondent for The New York Times, wrote about the "State Secrets Doctrine" in an article that appeared in The Times on November 9, 2021. Liptak's article was titled, "Supreme Court Weighs Case Against F.B.I. for spying on Muslims." Since he was writing a news story, as opposed to an opinion piece, Liptak doesn't exactly take a position. The following lines from Liptak's article, though, certainly aren't intended to make the reader feel warm and friendly towards the privilege:

Last month, the Supreme Court heard arguments in yet another state secrets case, that one about whether the government could invoke national security to block testimony by two C.I.A. contractors who were instrumental in the brutal interrogations of the detainee known as Abu Zubaydah, who was waterboarded more than 60 times and is being held without charge at Guantánamo Bay.

The ACLU, which is certainly on the opposite side of the political spectrum from Judge Napolitano, denounces the state secrets doctrine as follows:

The state secrets privilege has existed in some form since the early 19th century, its modern use, and the rules governing its invocation, derive from the landmark Supreme Court case United States v. Reynolds, 345 U.S. 1 (1953). In Reynolds, the widows of three civilians who died in the crash of a military plane in Georgia filed a wrongful death action against the government. In response to their request for the accident report, the government insisted that the report could not be disclosed because it contained information about secret military equipment that was being tested aboard the aircraft during the fatal flight. When the accident report was finally declassified in 2004, it contained no details whatsoever about secret equipment. The government’s true motivation in asserting the state secrets privilege was to cover up its own negligence (emphasis added).

In the Reynolds case, the government was granted the right to withhold evidence of of its own "negligence" (to protect "national security"). The government is now using that precedent, in the case of Abu Zubaydah, to claim a right to suppress evidence of illegal government "torture."
Governmentally-sanctioned "torture" is worse than "government negligence," but I don't think there should be any state secrets privilege at all - no such privilege in any case. I have an easy to understand reason for taking that position, too.
If we want to have "self-government" in this country - in other words, if we want to insist that the people tell the government what to do, rather than the opposite - then we need to know exactly what government agents have done, and are doing.
The people can't be in charge any other way. If the people don't know and can't find out what the people's agents and employees are doing, then we're not in charge of the government. It's in charge of us.
I think that's a pretty simple thing to understand.
Image Credit:
https://m.washingtontimes.com/news/2021/oct/13/lies-and-torture-cover-up-us-state-secrets-doctrin/