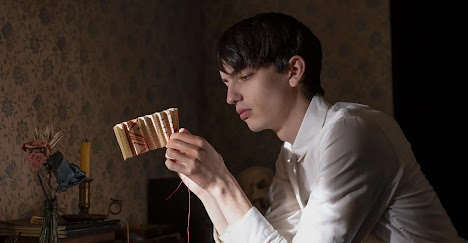 An arrogant a**hole (Benedict Cumberbach), demonstrates suppressed homoerotic inclinations throughout the film. Cumberbach is murdered by Kodi Smit-McPhee (pictured above).
The murder happens near the end of the film, after Cumberbach has spent most of the movie gratuitously tormenting Smit-McPhee and Smit-McPhee's alcoholic mother, Kirsten Dunst. This undeserved and extended torment of Dunst and Smit-McPhee is the behavior that most significantly qualifies Cumberbach for that "arrogant a**hole" designation. No one suspects Smit-McPhee of the murder.
While its connection to the plot is highly attenuated (at the best), the title of the movie reflects a quotation from the Bible (Psalm 22), which comes in right at the end:

Deliver my soul from the sword; my darling from the power of the dog.

Please consider this blog posting a short review of "The Power Of The Dog," by director Jane Campion.
Like the title says, "another night with Netflix."
Image Credit:
https://thecinemaholic.com/what-is-the-meaning-of-the-power-of-the-dog-title/
To Subscribe Just Click This Link