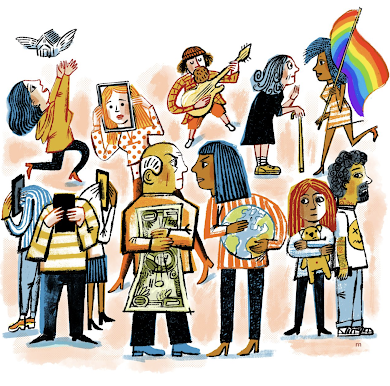 The Wall Street Journal says "it’s time to drop the silly stereotypes about Baby Boomers, Gen X, Millennials and Gen Z and discuss the real issues faced by each age group." The Wall Street Journal article making these assertions is titled, "The Bunk of Generational Talk." The New Yorker is on the same page. In The New Yorker's October 18, 2021, edition, Louis Menand asserts that "It’s Time to Stop Talking About 'Generations.'"
Both articles point out that the characteristics attributed to the different "generations" are often actually related to "lifecycle" characteristics - so the idea that the various "generations" are generationally different is largely fallacious. Bob Duffy, writing in The Wall Street Journal, explains what that means with this example:

We need to discard the clickbait headlines and bad research. Consider, for example, the idea that young people today are fickle employees, prone to switching jobs casually. A 2017 article in Forbes examined “Millennials and the Death of Loyalty.” It is true that younger people change jobs more often than older people—but that’s always been true, and young people today are no more flighty than in the past. In fact, it’s older workers who are moving more frequently than past generations of old, and, if anything, the young are holding on to their jobs tighter than in the past, given the tougher economic environment. Similarly, it’s true that young people today work fewer hours than they did in the past, but that’s because the working hours of all age groups have seen a long-term decline.

The New Yorker article, which is partly a review of Duffy's book, The Generation Myth - Why When You're Born Matters Less Than You Think, echoes what The Journal has to say:

Failure to recognize the way the fabric is woven leads to skewed social history. The so-called Silent Generation is a particularly outrageous example. That term has come to describe Americans who went to high school and college in the nineteen-fifties, partly because it sets up a convenient contrast to the baby-boom generation that followed. Those boomers, we think—they were not silent! In fact, they mostly were.

The term “Silent Generation” was coined in 1951, in an article in Time—and so was not intended to characterize the decade. “Today’s generation is ready to conform,” the article concluded. Time defined the Silent Generation as people aged eighteen to twenty-eight—that is, those who entered the workforce mostly in the nineteen-forties. Though the birth dates of Time’s Silent Generation were 1923 to 1933, the term somehow migrated to later dates, and it is now used for the generation born between 1928 and 1945.

It was people like these, along with even older folks, like Timothy Leary, Allen Ginsberg, and Pauli Murray, who were active in the culture and the politics of the nineteen-sixties. Apart from a few musicians, it is hard to name a single major figure in that decade who was a baby boomer. But the boomers, most of whom were too young then even to know what was going on, get the credit (or, just as unfairly, the blame).

[Karl] Mannheim thought that the great danger in generational analysis was the elision of class as a factor in determining beliefs, attitudes, and experiences. Today, we would add race, gender, immigration status, and any number of other “preconditions.” A woman born to an immigrant family in San Antonio in 1947 had very different life chances from a white man born in San Francisco that year. Yet the baby-boom prototype is a white male college student wearing striped bell-bottoms and a peace button, just as the Gen Z prototype is a female high-school student with spending money and an Instagram account.

I wrote about "Generations" in this blog, in 2015, stimulated by the book pictured in the image at the bottom of this blog posting. William Strauss and Neil Howe wrote their book in 1991. It was subtitled, "The History of America's Future, 1584 to 2069." Wikipedia summarizes the Strauss-Howe book this way:

William Strauss and Neil Howe describe a theorized recurring generation cycle in American history and global history. According to the theory, historical events are associated with recurring generational personas (archetypes). Each generational persona unleashes a new era (called a turning) lasting around 20–25 years, in which a new social, political, and economic climate (mood) exists. They are part of a larger cyclical "saeculum" (a long human life, which usually spans between 80 and 100 years, although some saecula have lasted longer). The theory states that a crisis recurs in American history after every saeculum, which is followed by a recovery (high). During this recovery, institutions and communitarian values are strong. Ultimately, succeeding generational archetypes attack and weaken institutions in the name of autonomy and individualism, which eventually creates a tumultuous political environment that ripens conditions for another crisis.

The Strauss and Howe book, in other words, is looking at patterns in American history, not really trying to differentiate "generations" based on the personal characteristics of the people born during a particular period. To quote what I said about Strauss and Howe in my 2015 blog posting:

Their research on past generations leads them to expect a "crisis lasting from 2013 to 2024." They say "the early 2020's appear fateful," and that they expect Malloch's "next Great Generation," the Millennials, will have "a chance to demonstrate civic virtue and to triumph over great adversity."

I think we need to pay attention to authors who were able to say, in 1991, that "the early 2020's appear fateful."
Strauss and Howe were certainly right about that - thirty years before the fact. I only hope that they were also right in their prediction that people who are my age, and those in what Strauss and Howe called the "Millennial Generation," will in fact join forces to "demonstrate their civic virtue, and will triumph over great adversity."
That is exactly what is going to be required. 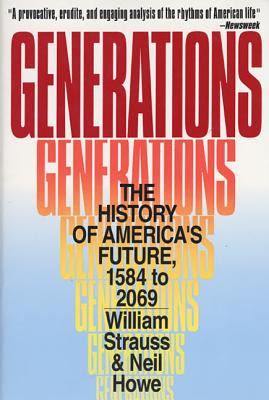