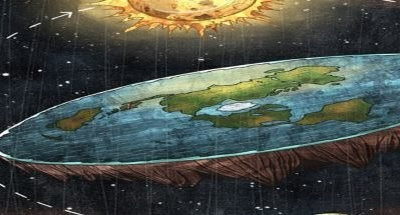 The article from which the above image was obtained is titled, "Revisiting Reality, fighting the status-quo." The article was authored by Alexander Girvan and was published in 2016. The essence of Girvan's argument is this:

History shows that holding on to a current reality means we sacrifice the possibility of a better one.

Presumably, Girvan means to suggest, by his illustration, that the "flat Earth" idea about reality is not as good as our more current belief that Earth is a sphere, orbiting our sun, in space. I doubt he is suggesting the opposite, but the point is that what we now consider to be a "reality" is in fact a human construction, and that we need to be open to discovering that our former ideas about reality should be changed.
I came upon Girvan's article because I was pursuing an idea propounded by New York Times' columnist David Brooks. In a column published in The Times on September 3, 2021, Brooks claims "You Are Not Who You Think You Are." I am not an expert in what sort of access non-subscribers can obtain to The New York Times' online edition, but if you can slip through The Times' paywall, I think Brooks' column is worth reading. For those who can't escape the paywall, here is a representative excerpt of what Brooks has to say:

You may think you understand the difference between seeing something and imagining it. When you see something it’s really there; when you imagine it, you make it up. That feels very different.

The problem is that when researchers ask people to imagine something, like a tomato, and then give some of them a just barely visible image of a tomato, they find that the process of imagining it is hard to totally separate from the process of seeing it. In fact, they use a lot of the same brain areas.

And when you stop to think about it, that makes some sense. Your brain is locked in the pitch-black bony vault of your skull, trying to use scraps of information to piece together the world. Even when it’s seeing, it’s partly constructing what’s out there based on experience. “It turns out, reality and imagination are completely intermixed in our brain,” Nadine Dijkstra writes in Nautilus, “which means that the separation between our inner world and the outside world is not as clear as we might like to think.”

We grew up believing that “imagining” and “seeing” describe different mental faculties. But as we learn more about what’s going on in the mind, these concepts get really blurry really fast (emphasis added).

The point Brooks is making (and that Girvan is making) is one with which I agree. The "reality" we most immediately inhabit does not approach us completely from outside, and does not exist independently of our own ideas about it. "Imagination" is a faculty of "image making," and as we undertake that process, all unaware that we're doing it, quite often, we participate in the creation of the reality upon which we depend, and which we believe defines both possibility and limitations. This idea about how "reality" is both discovered and constructed goes along with my personal conviction that "anything is possible," an idea that applies in what I call the "Human World."
When you think about the statement made by the headline on Brooks' column - "You Are Not Who You Think You Are" - the argument that Brooks actually presents in his column is a direct refutation of that statement. In so many ways, we ARE who we think we are, and "reality" is what we can imagine, and thus both discover and create.
John Lennon was absolutely correct in what I continue to think of as his most important song: "Imagine." Click that link to hear him sing it. Click on this link for the lyrics.
If our current reality is unacceptable (and I am suggesting that it is), we will need to imagine a new one.
"It's easy if you try."
__________________________________________________
Image Credit:
https://www.linkedin.com/pulse/revisiting-reality-fighting-status-quo-alexander-girvan
To Subscribe Just Click This Link