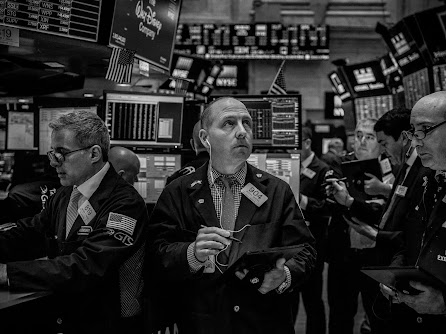 Zachary Karabel is the founder of The Progress Network, whose motto is phrased as follows: "Progress is still possible!" The Progress Network publishes a weekly newsletter, for people who "can't stop doomscrolling." The newsletter provides its readers with "a weekly dose of everything that's going right in the world." The newsletter is titled, "What Could Go Right?" If you are feeling a bit pessimistic about how the world is going right now, maybe you should sign up! Maybe the newsletter will make you feel better. However, I am not at all convinced that what you will read in the newsletter should persuade you that things, in fact, are going just fine. I don't think they actually are.
Besides his affiliation with The Progress Network, Karabel is also the author, most recently, of Inside Money: Brown Brothers Harriman and the American Way of Power. He is, in other words, one of those "money guys," though he would like to present himself as one of the "good guy" money guys.
On October 19, 2021, Karabel wrote an opinion column in The New York Times. His column was headlined "Just How High Could the Dow Go?" Here is an excerpt from Karabel's column:

Stocks have seen huge gains relative to wages. What then to make of the growth of the Dow? The more-than-fivefold gains for the tech-heavy Nasdaq? Is it a sign of an economic system badly tilted toward the wealthy? Proof that financial markets exist in an alternate universe of capitalism, ever expanding as the prospects for so many millions continue shrinking? ...

Though more than half of American households own stocks, the gains in financial markets are often treated as a prime example of how those with money — and how capital in general — have reaped unfair rewards. The current imbroglio in Congress over how to fund a several-trillion-dollar spending plan has turned to taxing stock market gains at a higher rate, in part because of a conviction that corporations and the very wealthy enjoy privileged tax treatment on those gains relative to wage earners.

Given the realities just outlined, Karabel wants to convince us that we shouldn't assume that those with money have "reaped unfair rewards."

It can be simultaneously true that capital has enjoyed an enviable position and that markets going up is not a sign of a rigged system. There are now about 4,000 publicly traded companies on the major exchanges in the United States — 20 years ago, there were around 7,000. Capital markets reward those that excel in eking out double-digit growth in a single-digit world. Only the strongest companies survive.

Those companies reap the rewards of capitalism. Apple, for instance, has had phenomenal growth. But it sells expensive phones to the hundreds of millions of people who can afford them, while many more cannot. The same is true for most public companies: They sell to those who can buy and ignore those that can’t.

Successful companies succeed thanks to a global middle class that continues to expand, albeit dented by a pandemic. Companies that cater to it can hire the best and brightest, and deploy technology to save on labor costs. They are hubs of innovation and creativity.

In the meantime, governments and citizens are saddled with the real costs of being alive. Companies don’t need to concern themselves with public infrastructure, defense, elder care, education and child care. The bulk of these costs is externalized.

In short, public companies are the cream of global capitalism — whether that’s a triumph of the system or an abomination, the price for owning a slice of this system should be at a substantial premium to everything else. And those prices should go up.

The challenge, then, is to broaden the gains of capitalism — not hobble it (emphasis added).

Karabel, in other words, wants us to think about how to make capitalism more equitable. That's the basis on which he'd like to be understood as one of the "good guy" money guys. Specifically, Karabel has these suggestions:
Well, those are at least two possibilities. Karabel doesn't go further with specifics, but his general suggestion is clear:

Given the dynamism of public companies and a world awash in capital, it’s a fair bet that we will one day see the Dow at 72,000 or 144,000. Rather than trying to slow that momentum, why not disseminate the rewards to wage earners by bringing them into the fold? That may sound like utopia, but only because we’ve forgotten to strive for it (emphasis added).

The way that Karabel puts this suggestion indicates to me that his audience is not the ordinary person -  those wage earners, for instance, who have been shortchanged as the money guys have raked in the dough. Rather, Karabel seems to be writing for those other "money guys," maybe those who aren't quite as enamored as Karabel is with the idea that the "money guys" should try to be "good guys," too. That expression "bringing them into the fold" seems clearly addressed to those who are already "in the fold." Karabel's idea, as I read it, is largely preemptive. "Hey, money guys," he seems to be saying, "we had better cut the workers a bigger slice or they might actually get the idea that their democratic government could make some more fundamental readjustments in just how capitalism works."
I am on the side of the workers and citizens who are currently the victims of what Karabel's book calls "the American way of power." I would be a bit bolder than Karabel in my suggestions. For instance, instead of leaving corporate tax rates as they are and using the tax code to "nudge" companies to "give all workers shares in the company," why not increase corporate taxes AND require corporations to insure that all workers are, in fact, "owners?" Why not require wage increases as a company prospers? Karabel thinks that the fact that the number of corporations has decreased from 7,000 to 4,000 in the last twenty years indicates that "only the strongest companies survive." My bet is that those companies with the most capital have eliminated their competitors by buying and then dismantling them, to increase their monopoly position in the market, and allowing them inordinate profits. Why not require the splitting up of the giant monopolies, the way we used to do it?
In sum, I don't think we should all wait around for "good guy" money guys to figure out just how much to accommodate the ordinary working men and women of the world. I think the working men and women of the world should tell the corporations what do do.
That's another kind of "utopian" idea, of course. It is one that suggests that we need to dismantle the "American way of power."
I am not a "money guy," but I hope I am a "good guy," and that's the way I'd like to see it go!
__________________________________________________
Image Credit:
https://www.nytimes.com/2021/10/18/opinion/economy-wages-dow-jones.html
To Subscribe Just Click This Link