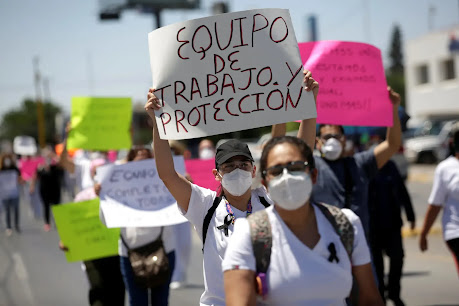 The presence of simultaneous uprisings in countries with a range of income levels, government types and geopolitical significance indicates a ... loss of faith in the social contract that shapes relations between governments and their people. Put simply, the governments of today seem incapable of offering both representative and effective governance. And ordinary citizens have had enough.

The statement above comes from a New York Times' article titled "Protests Are Taking Over the World. What’s Driving Them?" Zachariah Mampilly, who authored the article, is a professor of international affairs at the Marxe School of Public and International Affairs, City University of New York. He says that these worldwide protests are a sign of how little faith or trust people have in government:

In many countries, trust in government has been shaken by leaders who put their faith in market-based solutions to the detriment of most citizens. A Pew Research study shows that Americans’ trust in their government has declined to 24 percent from an average of 54 percent in 2001.

Mampilly's statement that "the governments of today seem incapable of offering both representative and effective governance," and that "ordinary citizens have had enough," does ring true. We have been expecting our governments to solve our problems, and they haven't been doing the job - and "the market" sure hasn't, either! The big question, of course, is what we ought to do about that.
Protests, caused by the failure of "social trust," do not themselves restore or rehabilitate the social trust that has broken down. Despite Mampilly's title, protests don't actually "take over the world." They merely dramatize that we, the people, are not actually in charge of the government - and that we object to that fact.
But if protests won't restore "social trust," what will?
I hate to be repetitious, but (as I have written here before), "if we want to have democratic self-government, then we will have to get involved in government ourselves."
In the end, the direct and active involvement of ordinary people in politics and government is the only thing that will restore "social trust." That, at least, is my opinion.
While protests can be an effective tool for demonstrating to those who participate in them, and to others, and to those currently in power, that citizens are dissatisfied and want change, what is ultimately necessary is an organized and successful effort by ordinary men and women actually to achieve an effective control over government - to take power themselves.
Successful efforts are based on our realization (in all senses of the word) that we are the government - and by our determination, because we truly realize this, effectively to assert our governmental power. Successful efforts are based on an assertion of our individual and collective decision to do whatever is necessary to make the changes that we want to see made - and to keep at it until we succeed. "Social trust" will be restored when, in a democratic society, or in a society that wants to be democratic, power is effectively wielded by "society," by all of us, through our own committed and continuing involvement.
Bob Dylan has a song on this topic - at least as I hear his lyrics. It is a song with some pretty good advice for each one of us, individually, as we consider the breakdown of our faith and trust in government. It is also some pretty good advice as we consider things from a community and collective perspective.
The song I am thinking about is titled, "Trust Yourself." You can click this link to listen to Bob Dylan sing the song. Here's the first verse of the song, with Dylan's good advice: