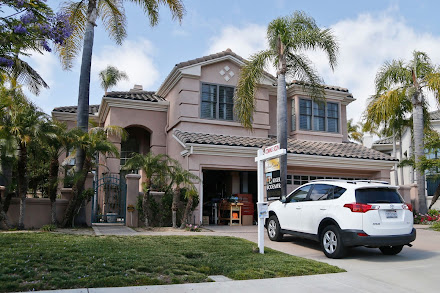 The Wall Street Journal published an editorial in its November 17, 2021, edition, focused on housing market issues. The Journal does maintain a paywall, and since the editorial is relatively short, I have reprinted the editorial in full, at the end of today's blog posting. I was mainly struck by the following statement, comprising the next-to-last paragraph of the editorial:

The number of second homes purchased in September was 53% higher than during the same month in 2019 and 63% higher for investment properties, according to American Enterprise Institute fellow Ed Pinto. Second-home buyers and investors chasing higher yield are competing with upper-middle income Americans, which is pushing up prices even more (emphasis added).

The "second home phenomenon," noted here by The Wall Street Journal, is definitely a real "thing" in my hometown of Santa Cruz, California. Proceeds from the astronomically high salaries paid to many high-tech workers in the Silicon Valley are being invested in "second home real estate" in Santa Cruz. Prices are skyrocketing, and that impacts both the sales and rental market, affecting ordinary income people who don't receive those high-end salaries from the tech giants. And Santa Cruz is not alone, of course, in facing this phenomenon, and those investing surplus funds in second homes in Santa Cruz don't just come from the Silicon Valley, either. They come from around the world.
Community activists in Santa Cruz are trying to fight back against the wave of "second home" purchases. They are seeking to qualify a "Second Home Tax" initiative measure, which they call an "Empty Homes Tax." If qualified for the ballot, and enacted by the voters, the initiative measure would help prevent Santa Cruz from becoming "Second Home City," and would, to the degree that rich purchasers continued to buy and own second homes, tax those second homes to provide funding for genuinely affordable housing - housing that would be permanently price-restricted to be affordable to average and below average income persons.
Click right here to find out more about the proposed Santa Cruz "Empty Home Tax' initiative measure. If you want to read The Wall Street Journal editorial in its entirety, here it is, below:
oooOOOooo
A Housing Gift for Beverly Hills
Just what the economy doesn’t need: subsidies for $1 million mortgages.
Home prices are soaring thanks to inflation and other government policies, so what to do? The Biden Administration’s answer is apparently to make homes more affordable for the paupers in Nantucket and Palo Alto by guaranteeing mortgages up to $1 million.
The Journal reported Tuesday that government-sponsored enterprises Fannie Mae and Freddie Mac are expected to raise their conforming loan limits to about $650,000 from $548,250 and nearly $1 million in “high-cost” markets from $822,375. That’s to keep pace with the inflation in housing prices, which were up 23% in the second quarter year-over-year.
Fannie and Freddie guarantee mortgages up to the conforming loan limit. The government backstop was intended to assist low- and middle-income buyers. Now it subsidizes affluent Americans who don’t need the help, which contributes to elevated prices, especially in expensive markets.
Even with the surge in housing prices, the median price of an existing U.S. home is only $363,700. Raising the loan limit to $1 million will mainly assist buyers in places like Santa Clara, Potomac, Md., and New York counties where the median home is worth about $1.2 million, according to the National Association of Realtors.

Buyers in these areas are paying more for homes and getting less than in the rest of the country. But blame government zoning and other policies that restrict supply. The solution is for local governments to encourage more housing development, not for the feds to prop up demand for high-end homes.
Well-to-do Americans in high-cost areas can still get a non-federally guaranteed “jumbo” mortgage at ultra-low rates, though they may have to make a bigger down payment. According to Bankrate, the average mortgage rate for a 30-year jumbo loan is 3.05%, roughly the same as a fixed 30-year average mortgage.
The average 30-year fixed mortgage rate is about 150 basis-points lower than a few years ago and half of what it was in 2007. Thank the Federal Reserve, which has maintained real negative interest rates and been buying $40 billion of mortgage-backed securities per month during the pandemic. But what the Fed giveth in lower rates, it taketh in higher home prices that reduce affordability.
Fannie and Freddie are supervised by the Federal Housing Finance Agency, so the conforming loan increase would need its regulatory approval. In September the FHFA also suspended the Trump Administration’s portfolio limits on GSE acquisitions of second home and investment property mortgages, providing another subsidy for the affluent.
The number of second homes purchased in September was 53% higher than during the same month in 2019 and 63% higher for investment properties, according to American Enterprise Institute fellow Ed Pinto. Second-home buyers and investors chasing higher yield are competing with upper-middle income Americans, which is pushing up prices even more.
If all of this sounds eerily familiar, it should. In the 2000s federal loan subsidies and low interest rates fed a housing mania that ended in panic and a crash. Taxpayers had to rescue Fannie and Freddie to the tune of $190 billion. Here we go again (emphasis added)?
Image Credit:
https://www.wsj.com/articles/a-housing-gift-for-beverly-hills-fannie-mae-freddie-mac-mortgages-1-million-11637100180