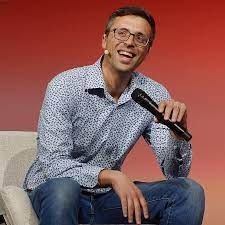 Ezra Klein, pictured above, is a New York Times' columnist. The headline that topped his opinion column on October 10, 2021, was "David Shor Is Telling Democrats What They Don't Want To Hear." That was the online version. In the hard copy edition of the paper, Klein's headline read, "Can Democrats Find A Winning Message?" David Shor, by the way, is a political consultant known for analyzing political polls. Shor works for liberal and progressive campaigns, and he thinks that the Democratic Party is in trouble.
"Hey," I am tempted to say, "why don't you tell us something that we don't already know?"
Klein's column is quite long, and thus is not susceptible to inclusion here. If you have the ability to elude the paywall erected by The Times, click on the link in that first paragraph, above, and get the whole story.
In general, here is the way I would characterize Shor's advice and analysis, at least as described by Klein: Shor is suggesting to the leadership of the Democratic Party that the Democrats should bring to politics the kind of "analytics" that the San Francisco Giants supposedly brought to baseball this last season - a season in which the Giants did a lot better than expected. The leadership of the Democratic Party should be forging its message (and its policies) based on what the members of the Democratic Party are telling the leadership they care about most.
Shor thinks that the Democratic Party is on course to lose its majorities in both the House and the Senate, and that where the Party is, right now, is likely to be "the high-water mark of power they’ll have for the next decade." To avoid what is likely to happen in 2022 and 2024, says Shor, the Democratic Party needs to "pass a package of democracy reforms that makes voting fairer and easier. To offer statehood to Puerto Rico and Washington, D.C. To overhaul how the party talks and acts and thinks to win back the working-class voters — white and nonwhite — who have left them behind the electoral eight ball." If the party doesn't do that, Shor opines, the Democrats "will not get another chance. Not anytime soon."
Klein outlines Shor's credentials to be taken seriously as follows:

Shor started modeling elections in 2008, when he was a 16-year-old blogger, and he proved good at it. By 2012, he was deep inside President Barack Obama’s re-election campaign, putting together the fabled “Golden Report,” which modeled the election daily. The forecast proved spookily accurate: It ultimately predicted every swing state but Ohio within a percentage point and called the national popular vote within one-tenth of a percentage point. Math-geek data analysts became a hot item for Democratic Party campaigns, and Shor was one of the field’s young stars, pioneering ways to survey huge numbers of Americans and experimentally test their reactions to messages and ads.

But it was a tweet that changed his career. During the protests after the killing of George Floyd, Shor, who had few followers at the time, tweeted, “Post-MLK-assassination race riots reduced Democratic vote share in surrounding counties by 2 percent, which was enough to tip the 1968 election to Nixon.” Nonviolent protests, he noted, tended to help Democrats electorally. The numbers came from Omar Wasow, a political scientist who now teaches at Pomona College. But online activists responded with fury to Shor’s interjection of electoral strategy into a moment of grief and rage, and he was summarily fired by his employer, Civis Analytics, a progressive data science firm.

For Shor, cancellation, traumatic though it was, turned him into a star. His personal story became proof of his political theory: The Democratic Party was trapped in an echo chamber of Twitter activists and woke staff members. It had lost touch with the working-class voters of all races that it needs to win elections, and even progressive institutions dedicated to data analysis were refusing to face the hard facts of public opinion and electoral geography (emphasis added) ....

Shor believes the party has become too unrepresentative at its elite levels to continue being representative at the mass level. “I don’t think it’s a coincidence that the people we’ve lost are likely to be low-socioeconomic-status people,” he said. “If you look inside the Democratic Party, there are three times more moderate or conservative nonwhite people than very liberal white people, but very liberal white people are infinitely more represented. That’s morally bad, but it also means eventually they’ll leave.” The only way out of this, he said, is to “care more and cater to the preference of our low-socioeconomic-status supporters” (emphasis added).