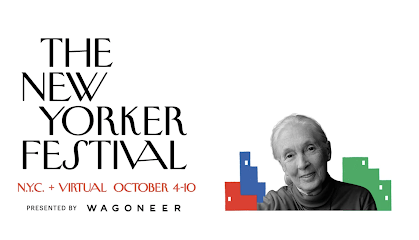 I was able to watch Andy Borowitz interview Jane Goodall during the The New Yorker Festival in early October. This was an interview worth watching. If you click this link, you can read a promotional piece about the interview. Maybe there will be a way for you to track down the interview itself, and I definitely encourage you to do that. I am crossing my fingers that both subscribers and non-subscribers might still have an opportunity to hear the discussion.*
For those who don't immediately recognize the name, Andy Borowitz writes comic satires for The New Yorker, which he presents under this heading: "Not the news." That disclaimer is probably legally required, since the headlines on his articles often seem more real than reality itself. Because he is not, actually, reporting on facts, but is advancing a satirical view of the actions of powerful and entitled, Borowitz and the magazine might well get in trouble with the laws of libel were people to take some of his assertions seriously. As an example, Borowitz published a piece on October 5, 2021, with this title: "Trump Claims He Fell Off Forbes’s Richest List Because They Failed to Count Rubles." Our litigious former President might send in the Clown Car filled with his attorneys should he sense that there was any actionable misrepresentation. The disclaimer provides some pretty good protection, legally speaking.
At any rate, there was no satire in evidence in the Borowitz-Goodall discussion. Borowitz is a long time fan of Goodall, an esteemed primatologist and anthropologist who is acknowledged as the world's greatest authority on Chimpanzees. Goodall is now eighty-seven years old, and speaking of her illustrious career, Borowitz called it "the Goodall days." I am sure I was not alone in being touched by Goodall, and by the affectionate dialogue she had with Borowitz.
The official "topic" of the discussion was Goodall's newest book, The Book of Hope: A Survival Guide for Trying Times. Goodall clearly thinks that "hope" is, in fact, our best recourse in what are "trying times" indeed. She lists four reasons for hope:
That all rings true to me. In these trying times, we can call upon our recollection of "the Goodall Days," observe with great appreciation what young people are doing right now, remember that Nature can, indeed, sustain and heal itself, and remember that we are at least a little bit smarter than we look (or act, sometimes).
After doing all that, we need to remind ourselves of that indomitable human spirit, to which we each have access, and upon which we all need to draw.
Right now. 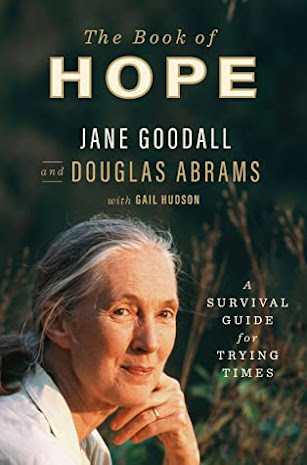