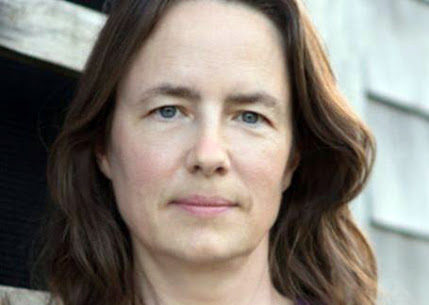 Heather Cox Richardson, who teaches history at Boston College (and who lives in Maine) publishes daily "Letters from an American." You can follow her daily postings on Substack by clicking this link. Richardson is pictured above.
Richardson's posting on September 28, 2021, addressed the battle then being waged in Congress over the nation's need to increase the debt ceiling. There was a big fight about that, which has, essentially, been deferred until December, when we can all enjoy reengaging on this issue.
In a way, this fight about the debt ceiling seems difficult to understand for the normal person, who naturally assumes that when somebody borrows money, the person who borrowed the money will acknowledge the fact that they are obligated to pay it back - and that they intend to pay it back. If an individual person applied for a bank loan, while proclaiming loudly in the lobby that he or she had no intention of paying it back, that person's ability to borrow the money would be nil. Same thing for a country, right?
Right. In fact, nations need to indicate that they know they have debts (when they do, and they all do), and that they intend to pay back the money they have already borrowed, or that they would like to borrow in the future. Voting to "increase the debt ceiling" is Congress' way to make this required acknowledgment. The United States has borrowed a lot of money, and expects to borrow more, and if there is an official statement that the country can only borrow X amount, and that they aren't going to pay back any amount beyond that, then the country is just like that customer in the bank lobby, shouting out that the customer won't pay back a loan, at the very same time that the customer is asking to borrow more.
I assume that most people reading this blog posting understand this principle, and understand that the battle in Congress, in September, was between the Administration (headed by a Democratic President, and with Democratic majorities in both the House and the Senate) and those Republicans in the Congress who wanted to embarrass the Democrats by preventing them from taking the steps necessary to allow the normal operations of government to work, since those normal workings of the government involve borrowing (and paying back) money.
All the experts agreed that if the United States government decided not to "raise the debt ceiling," thus acknowledging that the government intends to repay the money it has borrowed in the past, and that it expects to borrow in the future, this failure would "crash the economy" and lead to massive consequences all over the world. The Washington Post put it this way in its headline: "U.S. default this fall would cost 6 million jobs, wipe out $15 trillion in wealth, study says."
Since this matter, now temporarily resolved, will be coming back before the Congress before the end of this year, it is pretty important that everyone understand what is going on with respect to the stated intention of Republicans in the Senate to "crash the economy" by blocking an increase in the debt ceiling.
This is an effort to prove that our democratic and representative government can't work.
Well, is that true? Is it true that our government can't work?
Well, actually, that is true - at least as the government has currently structured itself! Our representative government can't work as it should if its normal operations require a supermajority vote in the United States Senate, and if Republicans in the Senate, as a minority party, are willing to "crash the economy" in their hope to win a partisan advantage.
Democratic government will not long endure if democratic government won't work. I am talking about "small D" democratic government. The effort to crash the economy for political gain is an effort to destroy democracy, to allow a minority of the extremely wealthy to take power. If that succeeds, restoring democratic government - "small D" democratic government - may be almost impossible.
Is there a way out? Well, yes, there is. The rules governing the so-called "filibuster" in the Senate, which permit a minority to decide what the majority can do, is what currently makes it possible for a minority to destroy the nation's economy, and its standing in the world, in the search for political advantage. Here is a brief explanation of the filibuster from Wikipedia:

[The filibuster] is not part of the US Constitution, becoming theoretically possible with a change of Senate rules only in 1806 and not used until 1837. Rarely used for much of the Senate's first two centuries, it was strengthened in the 1970s and in recent years, the majority has preferred to avoid filibusters by moving to other business when a filibuster is threatened and attempts to achieve cloture have failed. As a result, in recent decades this has come to mean that all major legislation (apart from budgets) now requires a 60% majority to pass (emphasis added).

Getting rid of the filibuster would allow whatever party has a majority position to make effective choices about what the government should do. If they are bad choices, another party will be given the chance, after the next election. That is how "democracy" is supposed to work, and we have a long history of proving that such a government can and does work. A new book by UCSC Politics professor Daniel Wirls suggests that there are a number of ways to remedy our current problem with the undemocratic filibuster. I haven't read Wirls' book yet, but I have heard him discuss it, and I think those concerned about the future of democratic government in the United States might want to hunt it down. It's called The Senate: From White Supremacy To Governmental Gridlock.
Unless the filibuster is eliminated, democratic government will continually be put to the test. Next test is in December.
As the philosopher Jiddu Krishnamurti is supposed to have said (not about the filibuster, specifically, but in an observation that applies in this case): "the door is there, and the key is in your hand."
Basically, that's what Wirls says, too.
__________________________________________________
Image Credits
https://lcnme.com/eventsactivities/celebrity-historian-to-talk-on-states-first-60-years/
To Subscribe Just Click This Link