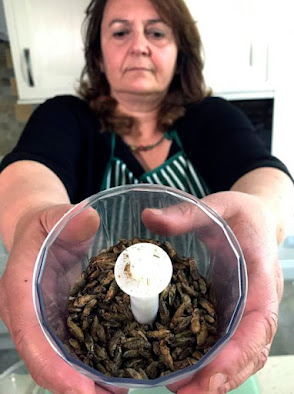 On July 26, 2021, I read a story that told me that I should start eating bugs. That's right, bugs. Insects!
The Mercury News version of the article indicated that the "global edible insect market is posed to boom." I guess that's what the research seems to say. Maybe it's a good time to invest. Tiziana di Costanzo, pictured above, is the co-founder of Horizon Insects. She makes pizza out of cricket powder.
I learned, online, just how Horizon Insects lays out the case for bugs:

You’ve heard the statistics: Insects can provide three times more protein and 30 times as much vitamin B12 as beef, using a fraction of the arable land and water. Futurists are as tired of saying it as you’re reluctant to take their advice: The human diet of tomorrow should pivot to bugs if we’re to stymie the worst effects of climate change.

I have to confess that I am not very enthusiastic about having to eat bugs - even after that pitch from Horizon Insects. The New Yorker, one of my favorite magazines, has also proposed that we "Save The Planet, Eat a Bug." Still, I am just not that wild about the idea!
Global warming, and the climate changes it is creating, are a real problem, and I do care about that. It is more than an "inconvenience," too. Global warming is an end-of the-world challenge to the way we have been conducting ourselves for the last 150 years. Dramatic actions are absolutely called for.
Maybe eating bugs should be on our dance card. Still, I am just not that enthusiastic!
How about we all agree to stop burning hydrocarbon fuels, right now - immediately, as soon as we possibly can? Then, after we have done that, we can rearrange our economy and society to deal with the changes that will necessarily eventuate.
Maybe that would mean eating bugs. In which case, I'll eat 'em. Some people say that bugs are really good, and good for you, too!
But here's my idea. Let's get rid of the hydrocarbon fuels first, rather than starting out on the bug diet to avoid having to do that!
Image Credit:
https://www.union-bulletin.com/what-pairs-with-beetle-startups-seek-to-make-bugs-tasty/image_9892c7f3-afd6-5445-b15d-89b3e27e8b68.html