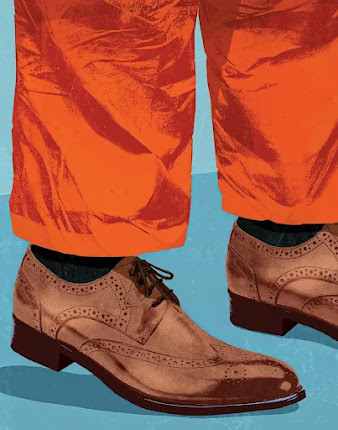 Evan Osnos got to sit in on a Zoom Support Group meeting for white collar criminals. Click the following link to read Osnos' report in The New Yorker. Osnos' report is titled, "The Big House - Life after white-collar crime." It is a fascinating excursion into the world of those who are "detoxing from power."
I am mentioning this article not only because it is interesting in and of itself, but particularly because of an observation made by Tom Hardin, one of the participants in the so-called "White Collar Support Group."
Hardin is described as a "lean and taciturn man in his forties...known with some notoriety in Wall Street Circles [as] Tipper X." The F.B.I. caught Hardin making illegal stock trades, and gave him a choice. To avoid going to jail, Hardin became an undercover agent, gathering evidence "in more than twenty criminal cases." He now makes his living as a "Corporate Ethics Trainer."
Here's what Hardin has to say about those who apologize for the wrongs they have done (these apologies almost always coming after they have been caught, of course). Hardin's observation is pertinent for all of us, even if we are not white collar criminals ourselves:

In his dealings with his peers, Hardin has learned to distinguish who is genuinely remorseful from who is not. “I’ll hear from white-collar felons who tell me, ‘I made a mistake,’ ” he told me. “I’ll say, ‘A mistake is something we do without intention. A bad decision was made intentionally.’ If you’re classifying your bad decisions as mistakes, you’re not accepting responsibility.”

I think Hardin is onto something - and it's something important. His observation has applicability in almost every situation in which we are compelled to admit that we did something wrong, and that we are sorry that we did. Oftentimes, to be totally honest, we are mostly sorry that someone noticed that we did something wrong, so that an apology has become necessary.
"I made a mistake; I'm sorry" is a common form of apology. This phrasing, though, and we are sometimes not aware of it, even as we utter the words, is actually an "excuse," not an "apology." Naturally, we are sorry we "made a mistake" - but, of course, who doesn't make a mistake, once in a while? This form of "apology," citing to our mistake, is really aimed at dodging responsibility for our own actions.
Individually and collectively, we need to take responsibility for what we do - and for what we have done.
And we need to do that before we get caught, not afterwards!
Image Credit:
https://www.newyorker.com/magazine/2021/08/30/life-after-white-collar-crime