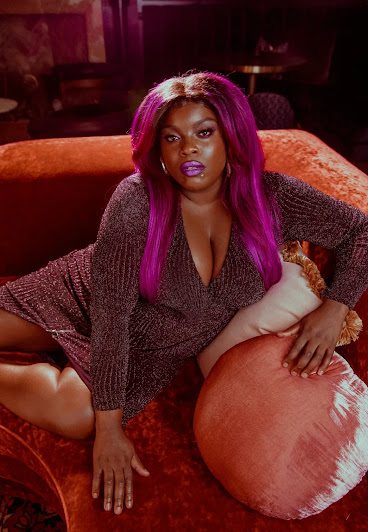 I have been advocating the activity of "talking with strangers" as one important way to help rejuvenate, or perhaps "resuscitate," our dysfunctional, and almost moribund, political life. I have written a lot of blog postings on this topic, and here is number five!
Yola, pictured above, whom The New York Times describes as a "powerhouse singer-songwriter from England," was featured in a July 26, 2021, story in The Times' "Arts" section. I was struck by the following statement, in which Yola discussed how to overcome racial inequity in the music business:

When you start feeling in your soul that something’s missing, and that feels gross and weird, then go out in the streets, go to bars with your friends, and just talk to people in the world,” she said, her mellifluous voice building momentum. Actually ask to work with people that are different, and hire people that are different — and by working and building it into your natural life, you will then have loads of people of color (emphasis added).

According to Yola, just "talking to people in the world," and intentionally seeking out those who are different, is a way to overcome the kind of division and estrangement that is one of our major challenges today. To my mind, that's a "talking to strangers" solution, and I think a validation of my general thesis. What works in the music business can work in politics and our social life, too.
There was another article in the same edition of The Times that gave me an idea of one way that many of us might be able to "talk to strangers" in a non-threatening way. I mean, this would be a way if you don't feel completely comfortable going out to bars for pickup conversations with people you never met before.
The Times' story that gave me the idea was a sad one. Anthony Veasna So was a first-generation Cambodian immigrant, known for short stories that The Times has described as "crackling, kinetic and darkly comedic." This description comes from Wikipedia. So's career was poised for takeoff, and he was just about to witness the release of his first novel, Afterparties, when he died from a drug overdose. As described by The Times, it is not really clear what happened, or even what substances were involved, just that it was a profound tragedy and apparently an accident:

So’s death is particularly confounding because it occurred just as his star was rising.... “Afterparties” is now poised for the kind of buzzy release rare for debut collections. Ecco announced a first printing of 100,000 copies, far more than what is typical for a book of short stories. Early champions include Brit Bennett, George Saunders and Bryan Washington, as well as Mary Karr, Dana Spiotta and Jonathan Dee, all three of whom taught So at the master’s of fine arts creative-writing program at Syracuse. The book was selected by the writer Roxane Gay for her monthly book club, and has appeared in the summer reading recommendations of Vanity Fair, BuzzFeed, The Wall Street Journal, Time and Men’s Journal. The literary journal n+1, one of the first major outlets to publish So’s work, earlier this year created the Anthony Veasna So Fiction Prize, a $5,000 award, in his honor (emphasis added).

It was that "monthly book club" mention that provided me with the idea I want to advance here. You don't have to be a published author, or a professor at Yale, to start up a monthly book club. What if some of us started up a monthly book club of our own? It could even be done virtually, though I think that in-person would be best. Assuming that we'd be trying to include persons who are "different," and have different perspectives, Facebook and other social media platforms could easily provide lots of prospects - lots of people who are "different" - and  with whom we could talk about serious topics, as part of a conversation about a book.
If "talking to strangers" is actually a way that could help us revivify our democracy, and is an idea that is appealing to you, think about that book club idea! Anyone can start up a monthly book club. Really!
Image Credit:
https://www.nytimes.com/2021/07/25/arts/music/yola-stand-for-myself.html