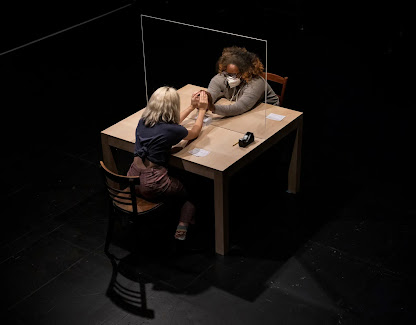 For some time, I have been promoting the idea that by "talking to strangers" we can help ensure the continuation of our representative democracy.
I first advanced this thought in 2017, in a posting titled, simply enough, "Talking To Strangers." I argued for the validity of this concept by reference to my personal experience doing political "precincting," door to door.
In August, 2020, in a blog posting titled, "Let's Have A Talk," I commented on an impressive article in Rolling Stone Daily that indicated that rather amazing political results are possible if concerned citizens can just be persuaded to call up strangers and talk to them.
I then read a wonderful book, Talking To Strangers, by Danielle S. Allen. Allen says, among other things, that "each interaction with a stranger holds the seeds of a transformation, and each of us already has far more political power within our grasp than we acknowledge or allow." I continue to endorse that observation! My blog posting on Allen's book is now labeled, "Talking To Strangers #2."
In "Talking To Strangers #3," dated March 12, 2021, I continued to pursue this idea, citing to a Wall Street Journal article that advances and supports my thesis.
Today, let me return to this topic once again, by way of commenting on the June 15, 2021, edition of The New York Times. Specifically, I refer to an article in the "Arts" section of The Times, "A Stranger And You Are the Stars." The article reports on the second installment of a three-part experimental and participatory production at the Public Theater in New York City. The overall production, written by the experimental company 600 Highwaymen, is titled, "A Thousand Ways."
Part One of "A Thousand Ways" was a participatory telephonic piece entitled, "A Phone Call." Part Two of the triptych, the subject of The Times' review on June 15th, is titled, "An Encounter." The Times' review, by Laura Collins-Hughes, outlines the unusual nature of the piece (two complete strangers meet, on stage, and follow a script, together). Was the encounter transformative, as Danielle S. Allen would probably have expected it to be?
The short answer is "Yes!" Here is how Collins-Hughes ends her review:

I am not usually the sort of person who walks around with Sondheim tunes as my internal soundtrack, but I was when I left “An Encounter.” Out on the sidewalk, as I headed toward Astor Place, then down 8th Street, I couldn’t stop scanning the weekend crowds. A snatch of “Another Hundred People” played on repeat in my head: the phrase “a city of strangers,” imbued with more warmth than I’d ever heard it.

It sounds weird, and it was, but “An Encounter” left me in an altered state, keenly aware of these many people around me whom I did not know, and who seemed so alive with possibility, complexity, depth. Any one of them might have sat across from me at that table and been my stranger.

I made my way through the throngs, trying to imagine the contours of their humanity (emphasis added).

Theater, when it's good, brings us face to face with truths that we have either been avoiding on purpose, or about which we have simply been unaware. This piece of theater, it seems clear to me, has made vividly apparent to our reviewer that we are, in fact, "in this life together." We are not "strangers," unconnected and isolate, though it may strike us that way most of the time. We are all connected, "alive with possibility."
There is another thing about theater that bears mentioning. Normally, we think of going to the theater to "observe," to see what is being presented to us. In this production, however, the "audience" is not only observing, but is acting. Collins-Hughes doesn't mention this directly, but her review indicates that she had a second revelation - besides the revelation that we are all connected, and that we are "all in this together."
Here is how I would describe that "second revelation." Though we are, of course, "observers," we are "actors," too, and this is, perhaps, the most important point, the most important point for all of us.
When we cease merely to observe what is happening to us, or what is happening before us, and when we decide, finally, to act ourselves, that is when we can - and that is when we will - change the world.
Image Credit:
https://www.nytimes.com/2021/06/13/theater/thousand-ways-encounter-review.html