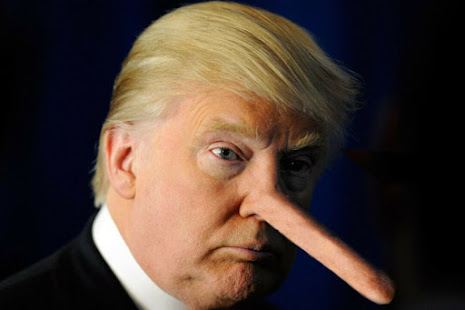 Please accept my invitation to read the entirety of an article by Roger Berkowitz, the Academic Director of the Hannah Arendt Center for Politics and Humanities at Bard College. Berkowitz' article, dated October 15, 2020, is titled, "How Do We Rebuild a Shared American Reality on a Foundation of Lies?"
That's a good question, right? Yes, because that's exactly where we are:

Today, our infatuation with images and our flight from the real world is all around us. The President lied about the size of the crowds at his inauguration. He lied to the American people about the Corona Virus. He is now lying about the threat of voter fraud. Just this week he appeared at campaign rallies after having tested positive for COVID-19. The audacity of Trump’s lies is at times difficult to fathom. What needs to be understood, however, is that the President’s lies are not attempts to convince or persuade; his lies are designed to buttress his image. His lies about the inauguration are to protect his image as a powerful leader. But above all, his lies that attack experts, civil servants, the intelligence agencies, and our political institutions are aimed to burnish his image as a truthteller.

It is a twist of irony that the greatest liar ever to hold the office of the Presidency won in large part because people saw him as telling the one big truth—that the system is broken and corrupt. Donald Trump can appear as a truthteller because he rejects the expert-and-pundit-driven theories and speculations that have come to justify globalization, imperialism, systematic racism, rape culture, and media objectivity.

Globalization and free trade have been sold as an unqualified good by the cosmopolitan classes who jet around the world attending conferences and opening factories, while millions of people in the lower and middle classes see their incomes diminished with little benefit. United States intervention in foreign nations is defended by the foreign policy elite as necessary to uphold the liberal world order, but the people who fight those wars are almost exclusively those on the bottom of the economic and social ladder. Systematic racism and white privilege embrace a theory of collective guilt, ignoring differences of class, origin, and hardship, and forgetting that where all are guilty, none are guilty—all of which leads to a public relations strategy of admitting an abstract guilt divorced from consequences. The claim from the #MeToo movement to “believe women”—rooted, of course, in the longstanding silencing of women—makes the ideological demand that all women be believed, until, of course, someone like Tara Reade accuses Joe Biden of rape or popular feminist professors are accused of harassment, at which point the phrase “believe women” hits its limits. And the embrace of “resistance journalism” by much of the media elite has, finally, made clear the real bias of mainstream journalism that largely ignores and diminishes the worldview of those outside the centers of urban and elite culture. There is no greater example of this than the continued effort by some in the press to connect the dots showing President Trump’s collusion with Russia even after the Mueller Report found no evidence of such collusion (emphasis added).

Our "common world" is ever more obviously being constructed on a foundation of lies. Being clear about that is certainly Step #1 in doing something about it. But what to do?
Arendt's seminal work, The Origins of Totalitarianism, makes clear that an acceptance of the kind of all-encompassing lying discussed above is an absolute precondition for totalitarian government. When "everyone" has come to believe that everything they hear or see is probably a lie - and we are getting close to that, today - totalitarian government, leading inevitably to massive death and destruction, is an inevitable consequence.
Here is how Roger Berkowitz explains "how to rebuild." While this article is dated from last year, I only came upon it in late June of this year, and I was pleased to see that Arendt, and Berkowitz, are arguing for a strategy that I also applaud, "Talking With Strangers."

It is in speaking with one another that we come to share common reference points and in our talking amongst ourselves conjure the factual world into being. At that point the facts become part of our shared truths, “the ground on which we stand and the sky that stretches above us.” The tendency to “transform fact into opinion, to blur the dividing line between them,” can lead to a situation where “simple factual statements are not accepted,” and even the most basic facts dissolve into the diversity of viewpoints. When this happens, there is no permanence and no durability to the world. A world without durability and permanence is an inhuman world and ceases to be a home and a haven mortal beings.

While Arendt wonders if there may be no remedy for cynicism, she also offers a faith that amidst the ruin of our human world, a new world can be reborn. She holds a fundamental belief in the power of talking. She writes: “We become more just and more pious by thinking and talking about justice and piety.” But why is this so?

First, in talking about the world with others, with those who disagree, we make the world visible in its complexity. Second, in talking about the world, we also make judgments and decisions about the world. Those decisions, Arendt admits, “may one day prove wholly inadequate.” But even absent agreements on the nature of a crisis and how to solve it, the act of speaking with one another about the crises of our times will, she argues, “eventually lay the groundwork for new agreements between ourselves as well as between the nations of the earth, which then might become customs, rules, [and] standards that again will be frozen into what is called morality.” In talking with one another we create the kinds of shared experiences and common points of connections that might, over time, become the building blocks of a new shared world that can give birth to new traditions and thus a new moral order.

This potential rebirth of a new common ethical world is not only possible, but likely. It depends, however, on the courage to speak honestly and openly with one another absent ideological rigidity (emphasis added).

So, there's our assignment! Highlighted in bold.
Image Credit:
https://duluthreader.com/articles/2020/10/30/116135-our-pinocchio-president