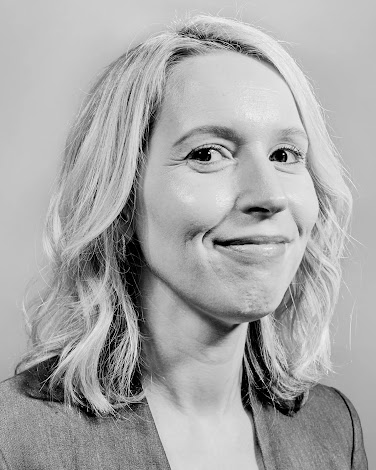 I am not a friend of the "Gig Economy." Click that link for an earlier rant. If you can penetrate The New York Times' paywall, you can read a modern defense of the "Gig Economy," now called the "Freelance Economy." Hayden Brown, the Chief Executive of "Upwork," is pictured above. "Upwork" is informing the people who run corporate America that they should "build [their] business with top freelancers." Brown's defense of her business model, as it appeared in The Times, is titled, "Riding the Freelance Wave."
One big problem with building our economy on the "Freelance Wave," or basing it on a "Gig Economy," which is the same thing, is that the corporations that control the jobs take no responsibility for the long term needs and interests of the workers. Somebody has to take responsibility for those needs and interests, of course, since we are, in fact, "all in this together" in the end. In the "Freelance" or "Gig" economy, that backstop responsibility will ultimately devolve upon "the government," our mechanism to provide for our community or collective needs.
Any problem? Well, yes. For one thing, the government is often quite a bit behind the curve, when it comes to stepping up and providing for the needs of those who have been "washed out" by the corporate economy, and when it acts at all, it often musters an inadequate level of resources to meet the need. Here's a picture of the consequences, when the government doesn't promptly mobilize to deal with social and economic problems. The picture is from the City of Santa Cruz (taken quite recently), but you could find similar scenes almost anywhere you look in California and beyond: 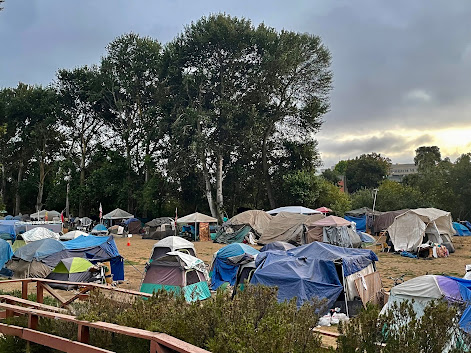 Naturally, the corporations, encouraged by facilitators like Hayden Brown, and by commentators like Santa Cruz County Supervisor Ryan Coonerty, who has written a book extolling the "Gig Economy," don't want to highlight the unspoken public subsidy that is inherent in the "Freelance" or "Gig Economy" model. Since we all, nonetheless, as citizens, will have to deal with the consequences of turning workers into "freelancers," let me suggest two public policy options that could help deal with the problems inherent in the "Freelance/Gig" model:
First, we could enact laws that require or significantly encourage corporations to transform themselves into cooperatively-owned businesses. Corporations that did that would continue to enjoy all those corporate tax breaks and governmental encouragements that virtually all corporations now obtain. Those that didn't would have to pay dearly, giving our government the resources to provide the necessary backstop function. This would be an indirect way to make sure that corporations didn't just use and dispose of the workers who actually produce the wealth that the corporations are amalgamating for their top business executives and their stockholders.
Second, the government could start taxing corporations more (a lot more, especially since lots of corporations don't pay any income taxes at all). If the government did that, it could then use those funds to provide a government-backed pension plan, health plan, education plan, and housing backstop for the workers who find themselves without means. We all, through our government, in other words, would make sure that the corporations would give us the financial ability to "have the back" of workers when adversity hits.
The "Freelance/Gig Economy" is premised on the idea that we are a bunch of deracinated individuals, and that each individual needs to look out for him or herself, and that if they find themselves unable to do that, too bad for them.
That isn't the reality of our life together. We really are "in this life together." If we don't find a way to make our community and collective life together work, then we are all going to go down, not just the "freelancers."
Image Credits:
(1) - https://www.nytimes.com/2021/08/13/business/hayden-brown-upwork-corner-office.html
(2) - Personal photo Gary A. Patton