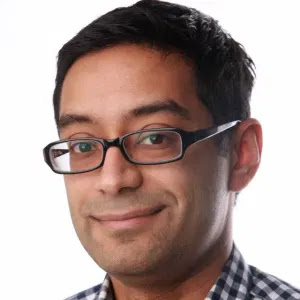 Pictured is New York Times columnist Farhad Manjoo. Manjoo mostly writes about technology, but in his column on May 12, 2021, Manjoo turned his attention to what I would call politics. His column that day was titled, "Why Did I Think We Could Get Rid of Billionaires?"
The column starts off with a description of Jeff Bezos' new yacht - or, to be more precise, Bezos' TWO new yachts. The first yacht is a 417-foot, three-mast "superyacht," costing more than $500 million. The second yacht, which will simply tag along with the superyacht, was acquired for one purpose only, to provide a helicopter landing pad for Bezos' girlfriend, who happens to fly helicopters.
The essence of Manjoo's column is as follows:

I argued that we ought to enact economic policies that recoup some of the booty from the superwealthy, but more important, instead of worshiping these masters of the universe, we should begin to look upon billionaires with moral suspicion. We should wonder about the kind of person who would hold claim to that level of wealth in a world weeping with so much suffering.

Typing these words now, I want to reach out and shake myself out of my delusions — what a sweet summer child I was to believe my fellow Americans would put billionaires on the run. The anti-billionaire boomlet died with the Democratic presidential primaries. Since then, billionaires have grown only wealthier and more powerful than ever. Now it feels as if we can’t quit them — even after a pandemic in which billionaires prospered beyond all measure while so many others suffered great loss, we are nowhere close to putting any significant curbs on extreme wealth.

The world is enthralled with billionaires, almost shamelessly so. In just the last couple weeks, one billionaire, Elon Musk, sent cryptocurrency markets reeling by pumping a “memecoin,” successfully tested a prototype rocket meant to travel to Mars and then took a charming turn as the host of “Saturday Night Live.” Bill and Melinda Gates, already both lauded and vilified (often unfairly, sometimes on the mark) for their role in global public health, announced a divorce whose cause and ramifications are just beginning to unravel. And besides the boat story, Bezos is the subject of an excellent new book, “Amazon Unbound,” by the Bloomberg journalist Brad Stone. In it, Bezos emerges as the ur-billionaire of our time, the deft wielder of a fortune so vast that he and his company are becoming “perilously close to invincible,” Stone writes.

As a matter of politics, that proposition is hard to refute. On the campaign trail, Joe Biden declined to “demonize” the wealthy and told rich donors that “nothing would fundamentally change” for their standard of living — a promise he has kept. The Biden White House has proposed tax increases on the wealthy, but the president has remained far from a tax on accumulated wealth or other efforts to snip the wings of the extremely wealthy. On the right, there may be growing suspicion of “woke corporations,” but on policy, Republicans remain glued to the interests of billionaires, not least the self-proclaimed billionaire who just left the White House (emphasis added).


Manjoo is making a lot of the same points that Anand Giridharadas is making in his book, Winners Take All, which I mentioned in one of my blog postings not so long ago.
Giridharadas, perhaps, goes even a bit beyond Manjoo in noting that one of the most objectionable characteristics of the "billionaire class" is their illegitimate claim to be able to deal with the problems that have actually been caused by the corporate malefactors that got them their wealth in the first place. Giridharadas calls such claims the "elite charade of changing the world," which is definitely a claim advanced by the billionaires as they get together during their "ski-resort conferences," often accompanied by our former president, Bill Clinton and his former presidential candidate wife, Hillary.
I once again recommend Winners Take All. I picked up my copy at one of those "Little Free Libraries." You can get your copy at your local (real) bookstore. Just click that link. Ordering it online, from Amazon.com, just provides more money to Mr. Bezos, and as Manjoo makes clear, he has quite enough already.
I leave you with the following message, captured from a Facebook posting. Just "Three Little Words!" 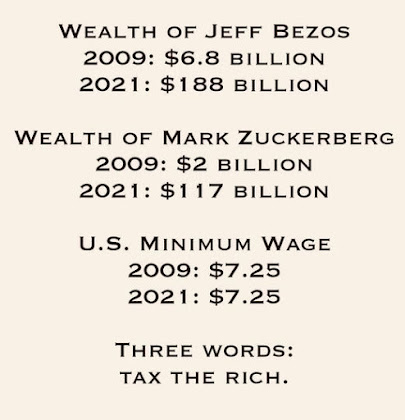