#153 / Don't Build Your City On An Earthquake Fault 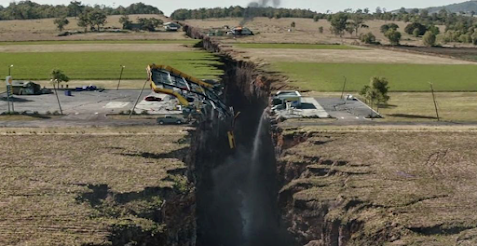 If you knew that an active earthquake fault ran right through an area - if there were a real danger of a future earthquake there - then that would not be a good place to construct your city. Right?
Right!
Avoiding potential dangers, as we construct our cities, and our civilization, is just plain common sense. Even if the danger seems relatively remote. Even if it seems somewhat problematic. If there is any significant chance that a future disaster could destroy your city - or your civilization - it would make sense to avoid that possible danger. Right?
Right!
Consider, now, the way we are building our civilization on the basis of computers and software. That is, of course, exactly what we are doing. It may even be fair to say that this is what we have already done.
Gasoline pipeline companies operate their systems by using internet-connected computers and associated software. Our electric power grid runs on the same basis. So do our major water systems. So does our banking system. So does our health care system. So does our government, in general. This is just to list a few examples.
We are currently moving towards putting individual automobiles online. Of course, health information is online, too, already. So are vast amounts of personal information on each one of us, collected in gigantic databases. Biometric information is also online. Just to list a few more examples.
As we know from recent news stories, there is a real danger that basing our civilization on a system of internet-connected computers and associated software makes them highly vulnerable. It's sort of like building a city on an earthquake fault. We're exposed. We are at risk.
Zeynep Tufekci is a sociologist whose work focuses on the social implications of new technologies. According to Wikipedia, The New York Times describes Tufekci as “having a habit of being right on the big things." Here is what Tufekci says about our current practice of building vital public and private infrastructure on the foundation of internet-connected computers and software:

Currently, only about one fourth of gas stations in North Carolina (where I am) are reporting that they have any gas. A ransomware attack shut down a key pipeline supplying these stations. Will this attack be the wake up call? I doubt it. The problem has been evident for such a long time that I’m afraid we won’t really address the threat until there is a true catastrophe.

Before the pandemic, I wrote a lot about digital security. Well, the lack thereof. I once compared what we are doing to “building skyscraper favelas in code — in earthquake zones.” It still feels the same, we’re just hearing more rumbles.

The dynamics of digital insecurity and ransomware and related threats are eerily similar to the lead-up to the pandemic. Just like with the pandemic, the alarm has been ringing about digital security for decades, but we are just hitting snooze instead of waking up and dealing with the threat. Of course, while the parallels in terms of the nature of the threat and some of its dynamics are fairly striking, the specifics are different and matter a great deal.

Now you know where I got that earthquake metaphor. It's no laughing matter. We are in significant peril, and we had better wise up. You can read Tufekci's complete discussion (from her Substack newsletter dated May 13, 2021) by clicking this link.
If we wouldn't build our cities on known earthquake faults, we shouldn't build their 21st Century equivalents on the basis of vulnerable internet-connected computer systems and their unsafe software.
We had better wise up!
Image Credit:
https://seismo.berkeley.edu/blog/2017/05/04/The-mystery-about-earthquake_fissures.html